Introduction
The American Guinea Hog is a true American breed, developed as a landrace in the southeastern United States. It is now believed to have strong ties to the extinct Essex pig from Britain. Guinea Hogs were prevalent in the southeastern states in the late 1800’s and early 1900’s. Their small size and lard conformation caused them to fall out of favor when America’s food and industrial industries discarded lard in the 20th century. In the 21st century, thanks to the work of the breeders and the breed association their numbers have increased and in 2014 they moved from Critical to Threatened on The Livestock Conservancy Conservation Priority List. 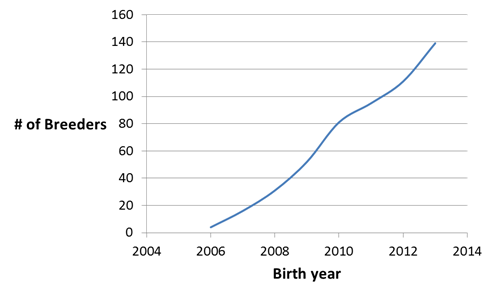 Breed overview
The American Guinea Hog Association (AGHA) registry was established in January of 2007. For this analysis we considered animals born from 2006-2013, which included 4,714 pigs.  During this time there were 323 unique breeders. The number of breeders registering their Guinea Hogs continues to increase over time.  Only 4 different breeders registered pigs born in 2006, and by 2013 this number increased to 139 breeders. 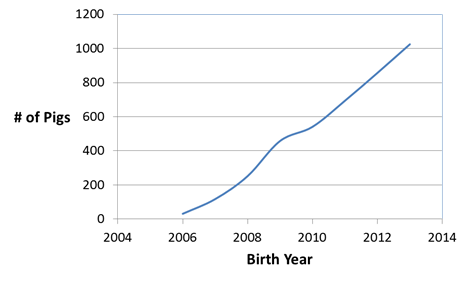 The increase in the number of pigs being registered and the number of breeders registering is encouraging. In general, however, the level of inbreeding in the population is too high. This is undoubtedly because of the small foundation base, and is supported by the results of a small 2012 DNA study1. 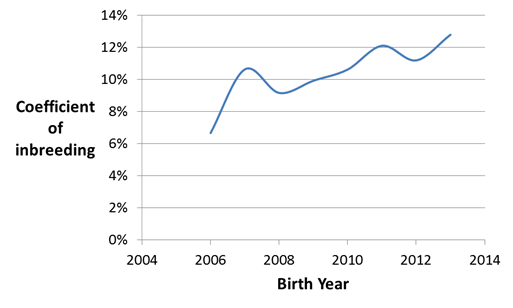 Using Breeders Assistant registry software, it is possible to create trial matings and look at the level of relatedness of the individuals and the coefficient of inbreeding for the potential offspring, and the Association registrar is a source of pedigree and breeding information for breeders.

When possible, matings should be chosen that either ensure that rare genetics are maintained in the herd or breed, or that complement selection traits.  For example, an inbred sow with narrow shoulders might be bred with an unrelated boar that is exceptional in his shoulders, so that this trait is improved in her offspring.

Popular Sire Syndrome
When looking at the most popular sire each year (sire with the most offspring each year), there does not seem to be much indication of popular sire syndrome. In 2006, one boar sired 32% of pigs born that year, but there were only 31 pigs registered. As time passed, the percent of offspring the top producing boar sired each year has decreased, which is an excellent sign. Only one sire was the top producing sire for more than one year, but it was early in the association history when fewer pigs were registered. Many sires are contributing to the population, which could reduce the level of inbreeding in the population as long as sire and dam are not related.

Looking at overall trends is a bit more concerning. The top producing sire overall has 101 registered offspring and is potentially still active. Out of the top 10 sires with the most registered offspring, 6 had pigs born in 2014 and 3 had pigs born in 2013. All of these sires are potentially still active. These are obviously quality boars that have great genes to pass to their offspring; however, it would be beneficial for the genetic diversity of the breed to begin phasing these boars out and giving new boars a chance.

Foundation Sires
Boars were considered foundation sires if they did not have parental records. This included 12 sires. Of the 12 sires, seven lines are still definitely active having descendants born in 2014. There are three sire lines that could potentially be active because they were sold to a breeder who no longer registers, but still has Guinea Hogs. The final two sire lines are potentially inactive.

It is encouraging that at least seven of the lines are still active. However, having only 12 foundation sires with offspring contributed to the high starting level of inbreeding in the population. With the large number of pigs being registered now, it is possible to start reducing the level of inbreeding in the current population. Unregistered descendants of the potentially inactive lines could also make important genetic contributions to the breed.

Summary
The number of breeders registering and the number of pigs registered each year continues to increase. This is fantastic news for the breed! There is some work to do to reduce the level of inbreeding in the population. Phasing out of the highest producing boars and mating unrelated animals would be a great place to start. Overall, the breed seems to be happy and healthy.

References
1 A Survey of Relationships Among Rare Breeds of Pigs.  K. Roberts, 2013.