Artificial insemination (AI) is a tool that can be used by heritage swine breeders to introduce new genetics into their herd with reduced cost and health risks compared to introducing live animals. A key factor in the success with AI is the ability to accurately identify standing estrus or “heat”.  Signs of estrus in gilts and sows can be classified as either primary or secondary, as outlined below.

As shown in Figure 2, once a gilt reaches puberty, or first estrus, or when a lactating sow returns to estrus after weaning, they normally “cycle” every 21 days.  Of course this can vary by farm or by individual pig, and cycle frequency from 18 to 24 days would be considered normal. The duration of standing estrus is about 60 hours in sows and about 40 hours in gilts. Ovulation, or release of the ova, occurs late (about 2/3-3/4) into the time of standing estrus, so if a gilt is ‘in heat’ for 24 hours, ovulation likely occurred 16-18 hours after onset of estrus. Detecting heat on the first day is important to minimize re-cycling and to increase productivity. Additionally, sperm need time for capacitation while in the reproductive tract before they come into contact with the ova. Therefore, it is important to recognize the estrus and to introduce the semen during pre-ovulation. If necessary, AI can be repeated, depending on the intensity of the estrus. 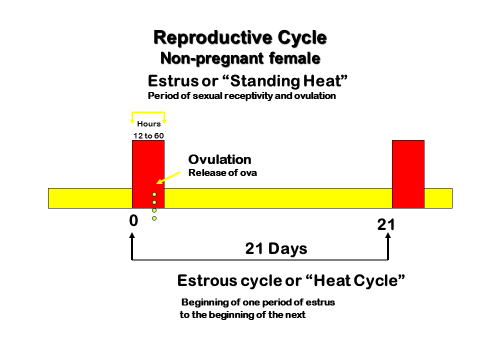 It is important to know that the duration of standing heat is variable among individual females. Other sources of variation are:

Sows that lactate or nurse their litters with 7 or more piglets for less than 28 days and are fed well generally return to estrus within 7 days after the litter is weaned. However, expect considerable variation in the time to return to estrus when lactation lengths are beyond 28 days, litter sizes are small, or when groups of sows and litters are comingled during lactation. In many instances sows may return to heat while nursing during long lactation lengths or with small litter size. This is a fertile estrus, and if the goal is to produce another litter as quickly as possible, sows can be mated at this estrus. For first parity sows, waiting until the following estrus often results in larger subsequent litter size.