“Sheer elegance!” No words can better describe the first impression one gets when they first see a Yokohama chicken. Brilliant, pure-white background feathering is accented by red across the shoulders and back and white-flecked red breast in the Red Shouldered variety, and a long flowing tail, long saddle feathers, and sickle feathers dragging the ground in both the Red Shouldered and White varieties. 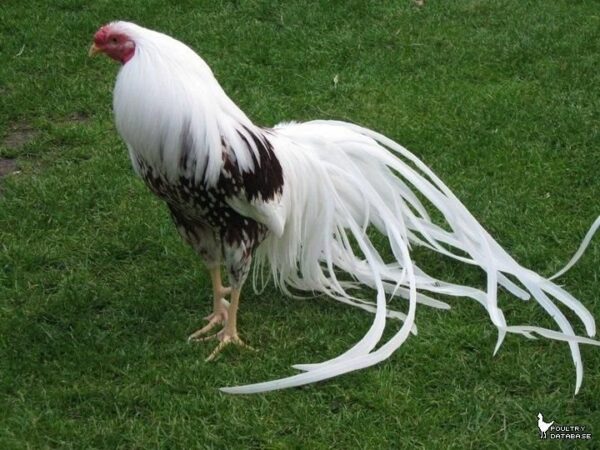 Long-tailed chickens were exported to France (by French missionaries) and Germany from the newly established port of Yokohama in 1864. Instead of displaying the fowls as Japanese Long-tails or “Jitori”, or by the breed name “Minohiki” as they were called in Japan, they were named after the port city, Yokohama, and called “Race de Yokohama”. In Germany, the first president of the German Poultry Association, Hugo du Roi, began breeding them, so, like the Phoenix chicken, the Yokohama is a German creation developed from the long-tailed, Japanese fowls imported in the late 1800s.

In 1869, a Mr. Prosche from Dresden, Germany, was able to obtain a trio of these birds from Paris. Mr. Prosche twice tried to import more of these beautiful Japanese chickens, but only males survived the sea voyage. Concerned with the breed’s small genetic pool, famous German author Bruno Duringen imported some Yokohamas from Japan in 1902. Again, only males survived the long voyage. Out of necessity, breeders outcrossed to Malay, Phoenix, common game fowl, and, later, Sumatra chickens to reinvigorate the breed.

Breeders worked to refine Yokohama characteristics and the United Kingdom formed a Yokohama breeders club in 1904.

Until 1922, a red-shouldered variety of Minohikis also existed in Japan. Today they are extinct and the Yokohama breed is all that is left to represent this unique color variety.

It is unclear when Yokohama chickens arrived in the US. However, they were added to the American Poultry Association Standard of Perfection in 1981 in two varieties: White and Red Shouldered.

As a result of the multiple countries involved in the development of the Yokohama breed, many varieties of chicken known as the Yokohama exist today. For example, the US refers to British birds as Phoenix rather than Yokohama chickens.

In type, this ornamental breed resembles the Sumatra chicken, but with much longer saddle, sickle, and tail feathers. Tails of three and four feet in length have been produced on Yokohama chickens. In Japan, the Yokohama’s ancestors are said to have produced tails as long as 27 feet. They have a walnut-shaped comb, small or missing wattles, orange-red eyes, and yellow legs. Males are 4.5 pounds and females are 3.5 pounds.

Both White Yokohama and Red Shouldered Yokohama chickens have a purity and luster to the white feathering. This is a result of genes for dominant white. The color pattern on the Red Shouldered variety is the result of incomplete dominance of white to red genes.

The Yokohama chicken is an alert breed with a game-like appearance. They are indifferent layers and go broody after laying only 12 to 14 small, cream/tinted eggs, and generally lay only 60-80 eggs a year. The chicks are hardy but require extra protein when their tails are growing.

These birds prefer to be warm. Roosters should be kept away from roosters of other assertive breeds, although the females can do well in a mixed flock if given plenty of room to roam. They are easily to tame and handle and do well in confinement.

This friendly ornamental breed is well-suited to estates where it can roam at large, thriving best when given a good deal of freedom to forage, but they are not a good choice if you want meat and/or eggs!