The Japanese traditionally kept “garden chickens” – a combination of outdoor pet and ornament. These birds often had long, impressive tails, sometimes 12-27 feet! Such lengths are achieved by a combination of genes that cause the tail to continue to grow, not molt, over several years. It takes great care in feeding and housing of the roosters, with their tails tied in loops using silk strips and often being confined to perches to produce such wonderful tails. Europeans who visited Japan took some of these birds, the famous Onagadori, back with them, but they were faced with a problem: Onagadori did not do well in the cold European climate, and many became sick and died. They were considered a bred with a delicate constitution, and fanciers began to look for a solution. 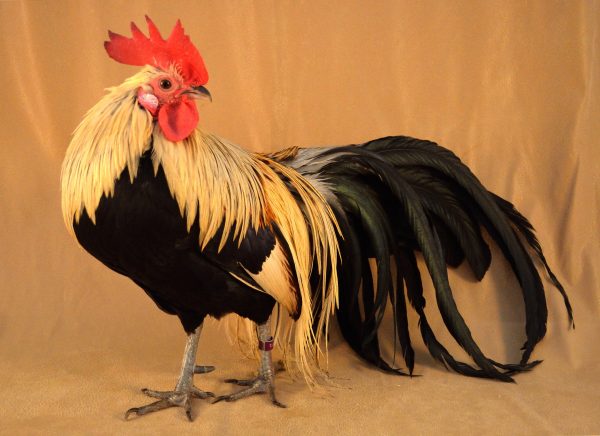 Mr. Hugo du Roi of Germany, and first president of the National German Poultry Association, started with the Onagadori and bred them to vigorous birds like Leghorns and some Dutch breeds. History tells us that the Onagadori was developed from crosses of Shokuku and Totenko, and possibly Minohiki long-tail chicken breeds of Japan. It is these chickens, crossed with Leghorn, Malay, Modern Game, Old English Game, Ramelsloher, Bruegge Game, Yokohama, and Kruper that produced the modern Phoenix. It is worth speculating that the name “Phoenix” was given to the resultant chickens to acknowledge the seeming “rise from the ashes” of their soon-lost parents.

Phoenix chickens were found in America before 1924, including those owned by F. L. Sewell, of Michigan. At the 1934 World’s Fair, birds that could be termed Onagadori were displayed. The famous poultryman, John Kriner Sr., of Pennsylvania, was able to obtain these birds. Cy Hyde, of New Jersey, later got birds from Mr. Kriner and these breeders developed the American Phoenix. American breeders working with these lines have maintained the Phoenix breed.

Phoenix chickens were recognized in the American Poultry Association Standard of Perfection in three varieties: Silver in 1965; Golden in 1983; and Black-Breasted Red in 2018.

The extremely long tails of the Onagadori chickens are possible because they carry a gene that keeps them from molting annually, so their tails continue to grow. The crosses made to create the Phoenix has all but eliminated this gene, but they still can grow impressive tails with proper care. They molt each year or every other year, and tend to have wide, rigid sickle feathers of 2-5 feet in length and saddle feather of 12-18 inches. Only the roosters have the long tails.

The Phoenix chicken is an ornamental/exhibition breed, alert, with a pheasant-like appearance. They have a single bright red comb with five upright points, bright red wattles, oval white earlobes, reddish-brown eyes, light to dark blue toes, and smooth shanks. They are fair layers of 52-126 small/medium cream/tinted eggs per year. They do go broody and are good mothers. The chicks are hardy, but require extra protein when their tails are growing. Males weigh 5.5 lbs and females 4 lbs.

The breed is docile, but tends to be aloof. It is good practice to handle chicks when they are young so they become accustomed to it if you want them to be friendlier to humans as adults. They are OK for respectful children who will not pull their attractive tails!

The breed is well-suited to estates where it can roam at large, thriving best when given a good deal of freedom. They do not mind confinement, but their perches need to be high to keep their tails clean, so they may need cages or coops more designed towards their needs as they are considered a high-maintenance breed. They can fly. They can live with other chickens, but the roosters may be a little aggressive. They do better in warm rather than cool climates.