Temperament:
Active; Can be flighty or calm

The origins of Buttercup chickens are unknown, but they are believed to have developed in Sicily, an island off the coast of Italy. The island was the home of many chickens with the comb type of the Buttercup, and they have been used for centuries by Sicilian farmers who didn’t breed them with any standard color pattern but maintained the Buttercup comb and green legs seen in the modern breed has.

In Poultry Fancier in 1913, an article describes a first introduction of Buttercups by a sea captain who brought some on a sea voyage to provide meat. However, the hens began to lay large, white eggs and soon became pets of the crew. 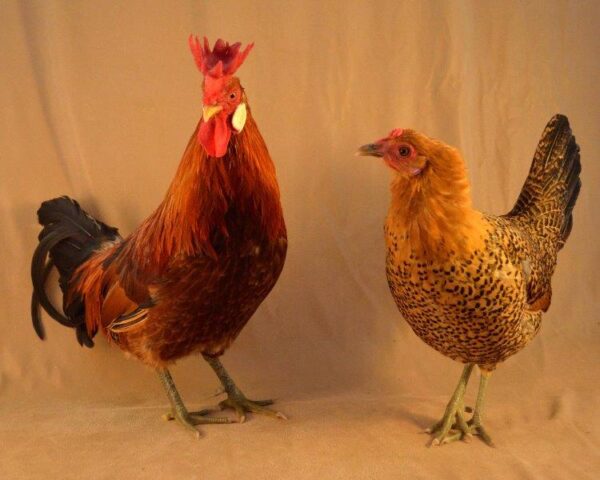 The first importation of Buttercups from Sicily to America is thought to have been around 1835, but the first well-documented importation was in 1860, when C. Carroll Loring of Dedham, Massachusetts, received birds from his neighbor, Captain Dawes. Loring made subsequent importations, breeding and promoting the chicken for about 50 years. We also know that all the stock today descends from or is related to an importation that arrived in America in 1892.

Though Loring put great effort into promoting Buttercup chickens, it wasn’t until 1908 that two other promoters were successful. Mr. J.S. Dumaresq of Easton, Maryland, and L.B. Audigier of Knoxville, Tennessee, positively leveraged Mr. Audigier’s position as publisher of “Industrious Hen”. A breed club was formed in 1912, and it soon had over 300 members. There were large classes at many shows, but their popularity was short-lived. The breed had been promoted to the public on its superior utility, but the Buttercup was only average at egg production. Breeders were also split regarding proper color patterning as little attention was given to that at first. Buttercup chickens were recognized in the American Poultry Association Standard of Perfection in 1918.

Interestingly, the breed was being embraced in England even as it declined in America. By 1920, the English had a breed club, but popularity once again faded.

Buttercup chickens get their name from their unique comb shape and the golden buff color of the hen’s plumage. The Buttercup’s comb is actually two single-combs that merge over the beak, as well as at the back. The combination on the best specimens forms a cup-shaped “crown” – that is, a cup surmounted by regularly spaced medium-sized points. Imperfectly formed Buttercup chicken combs look like a pair of antlers.

Buttercup hens and roosters are different in color. Roosters are a rich reddish-orange with a black tail. Hens are golden buff with regularly marked black spangles, oval in shape, and positioned in parallel rows. The black sections of both male and female are a lustrous greenish-black. Both males and females have yellow skin, white earlobes (in England, the earlobes are red), reddish bay eyes, light horn-colored beak, and willow-green shanks and toes with the bottom of the feet yellow. Hens may grow spurs on the backs of their legs like other Mediterranean breeds. Males weigh 6.5 lbs. and females 5 lbs. Buttercup chickens are a non-broody, small to medium white egg-laying fowl. They can produce about 140-180 eggs per year.

They are a good breed for hot climates, as they don’t like cold weather. They don’t like confinement and are good foragers and free-ranging, and like to spend their time exploring. They scratch and dig more than the average chicken and so are great for working a compost pile.

They are a calm breed but are very active. Some strains of Sicilian Buttercups are almost wild and reactive to humans. Other strains are docile, friendly, and sweet. Depending on the strain, they may or may not do well with children, although handling them from the time they are young may help. They are good in a mixed-breed flock as long as they are not confined. Like most Mediterranean breeds, they are chatty and they are noisier, though not louder in volume, than other chicken breeds.

With a cup-shaped comb resembling a flower blossom, golden buff plumage, and willow greenshanks and toes, it’s easy to see how the breed has earned the nickname “Flowerbird.”

Characteristics:
Good forager and does well on free range in warm climates