The Dominique chicken is recognized as America’s first, and oldest, chicken breed. There are several theories for its origin. Some feel it was brought from southern England by early colonists, the Pilgrims – hence an original name “Pilgrim fowl.” Others believe it originated in the French colony of Saint Dominique on what is now the island of Haiti, and the reason they have been known as “Dominikers” or “Dominic” chickens. They have also been known as the Dominico, Blue Spotted Hen and the Old Gray Hen. 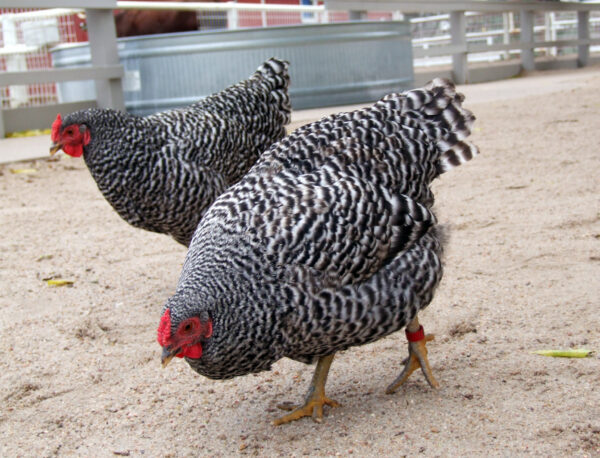 However they arrived, they have been in America since at least the 1750s, and were a popular dual-purpose bird. The Dominique was bred plentifully on American farms as early as the 1820s. Breeders refined the bird by crossing with some of the Asian varieties, and later, attention was given to developing more uniformity in chicken breeds. In 1849, some were exhibited at the first American poultry show held in Boston, and over 10,000 people attended to see 1,423 birds.

In the 1860s, Black Java chickens were crossed with single-combed Dominiques to create the Plymouth Rock breed. Although it was a bit larger than the Dominique, it was very similar. At the time, the two breeds could have either a single comb or a rose- comb. However, in 1870, the organizers of a poultry show in in New York ruled that rose-combed barred birds should be exhibited as Dominiques and single-combed barred birds should be entered as Plymouth Rocks. This ruling was confirmed in a Standard of Excellence in 1871. In 1874, the new American Poultry Association included the Dominique in the first edition of the American Standard of Perfection.

The breed enjoyed popularity until the 1920s when interest in them waned due to the passing of long-time Dominique enthusiasts and breeders. The breed survived during the Great Depression due to its hardiness and ease of upkeep, but after World War II, as commercial industrial poultry operations took a foothold in the United States, the Dominique again experienced a decline. The breed was never used commercially as was the Plymouth Rock.

By 1970, there were only four known flocks in the United States. They belonged to Henry Miller, Edward Uber, Robert Henderson, and Carl Gallaher. There was concern that flocks were not pure and that the breed only existed in exhibition strains. Through the effort of dedicated individuals and The American Livestock Breeds Conservancy (ALBC, now The Livestock Conservancy), the remaining owners were contacted and convinced to participate in a “breed rescue”. Through their efforts, many of the old bloodlines were saved, including one flock line that had been in existence for more than a hundred years. In 1973, the Dominque Club of America was founded to promote the breed and encourage new fanciers.

Reports published by ALBC showed that from 1983 until 2006, Dominiques steadily rose in numbers. As of the most current Livestock Conservancy census in 2021, it appears that the breed numbers are stable.

The Dominque is a medium-sized black and white barred bird, also known as “cuckoo” patterned. The barred plumage coloration is also referred to as hawk-colored and serves the Dominique in making it less conspicuous to predators. The Dominique sports a rose comb with a short upward curving spike that is characteristic to this breed. The males average 7 lbs. and the females 5 lbs. Their tightly-arranged plumage, combined with the low profile of the rose comb, makes the breed more resistant to frostbite than many other breeds of fowl. Dominiques carry their heads high up on well-arched necks. The males of the breed have an almost “u” shaped back outline. Their body is broad and full, with long and full tail feathers that are held the highest of the American breeds. Females have back outlines that slope from head to tail. Their combs, face, wattles, and earlobes are bright red, and their skin, legs, feet and beak are yellow.

Although categorized as a dual-purpose breed, these birds are first and foremost egg producers with hens historically averaging 230-275, light-to-dark brown, medium-size eggs a year. Hens may be broody or not – depending on their line. Broody Dominques make very good mothers.

Historically, the close feathering of this breed not only protected the birds in cold weather but provided ample material for the pillows and featherbeds of their owners. Dominiques can also adapt well to hot, humid climates.

The Dominique is an excellent breed for those who are interested in “trying” chickens and want a family-friendly breed. The breed is friendly and personable, and they are a good breed for children, especially if they are fledgling farmers and interested in 4-H or other competitions. These birds are good foragers, but can live in confinement as well.