In 1843, the Chinese signed a treaty that opened all their ports to trade. Once the ports were open, many previously never seen landrace chicken breeds became available – some from the northern part of the country and some from surrounding port cities. Included were extremely large chickens with feathered shanks and toes from the areas near Shanghai. The ships took all types of cargo, including these unique chickens for meat and eggs on their return trips. The surviving birds were often given exotic names and sold for profit at their ports of call. 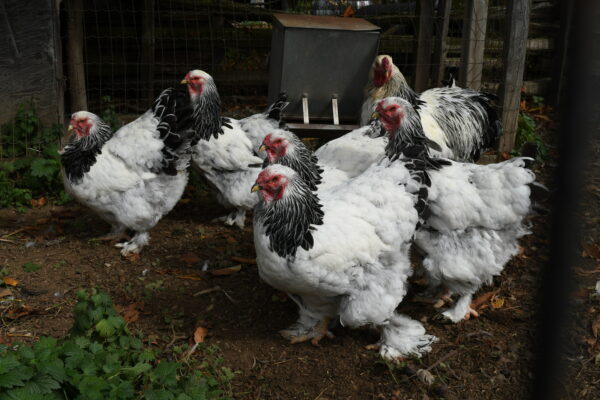 Few breeds have as much controversy as to their origins as does the Brahma chicken. While many varied claims were originally accepted as fact by early authors, this breed was developed in America from very large fowls imported from China via the port of Shanghai. It also seems clear that Chittigong fowls from India (now Bangladesh) were used to a very small degree and stamped head and comb characteristics onto the breed – differentiating it from the Shanghai breed (now known as the Cochin). In those early days it should be remembered there were no written standards, no poultry associations, and no registries. Since what became known as the Brahma chicken was being presented under at least twelve names, there was much confusion. The credit for shortening the name to Brahma goes to T.B. Miner, publisher of The Northern Farmer, who in 1853 or 1854 did so for very practical reasons – saving space on the printed page!

Early Brahma chickens were first shipped to America and then to England. This breed, together with the Cochin, fueled what became known as “Hen Fever” – a national obsession for poultry that hit both America and England around 1850.

The original variety was the Light Brahma. In December 1852, to promote his stock, Mr. George Burnham shipped nine of his finest as a gift to H.M.G. Majesty Queen Victoria of England – making sure the gift was much publicized. Prices jumped from $12-15 per pair to $100-150. Burnham’s stock proved of quality and formed the basis for the Dark Brahma variety – which was developed in England and later shipped back to America. Dark Brahmas tended to be about one pound lighter in weight than the Light Brahma.

The Brahma was generally considered the leading meat breed for the period of time from the mid-1850’s through about 1930 – some 70 plus years. As broilers, Brahma chicks were killed quite young, about 8-10 weeks of age. They made a most profitable roaster at 8 months, later than many breeds, but it was found that virgin cockerels were still tender as roasters at 12-13 months – making them competitive against capons. As a family fowl they were unequaled, and a large Brahma could feed a moderate-sized family.

Both the Light and the Dark Brahma were accepted to the American Standard of Perfection in its first printing in 1874. Though from the beginning some buff specimens were produced periodically, it was not until 1924 that the Buff Brahma was accepted as standardized as well.

Brahmas are large chickens with feathers on their yellow shanks and toes, pea comb, reddish-brown eyes, red earlobes, yellow beaks, smooth fitting plumage with dense down in all sections, and broad, wide head with skull projecting over the eyes – termed “beetle brow.” Their feathered legs appear like a narrow “V” if viewed from the side. They can be up to 30” tall. The mature slowly. They come in three color varieties – the Light, the Dark, and the Buff.

Often referred to as the “King of All Poultry,” the Brahma chicken is appreciated for its great size, strength, and vigor. By 1901 some individual birds were documented to have reached the incredible weights of 13-14 lbs. for females and 17-18.25 lbs. for males – though 10 lb. females and 12 lb. males were the rule and remain so today.

From the beginning Brahmas have been recognized not only for their unusual appearance and size, but also for their practical qualities. First and foremost Brahmas are found to be extremely hardy chickens. They are also good egg-layers for their size, producing up to 200 large, medium-brown eggs per year. Considered a superior winter-layer, they produce the bulk of their eggs from October to May. The hens tend to go broody in early summer and will sit devotedly on their nests, but because of the size of the hen, the hatchlings need to be watched to make sure they don’t get trampled.

Brahmas thrive best on dry, well-drained soils and in moist, cool climates. The feathering of their shanks and toes is a problem where the ground is damp and muddy as the mud clings to the feathers and keeping their feet wet and causing their toes to be prone to frostbite. It was popularly known as the least susceptible chicken to cold and exposure, owing this strength to its pea comb and tight feathering with down through all sections. It is not an ideal fowl for southern climates, where they need ample shade and water as they do not tolerate the heat well.

The breed is easy to contain, as its size and weight making it unable to fly over low fences very easily. They also stand confinement extremely well, but also like to spend a majority of their day foraging, although Brahmas are not wide ranging fowl or as active in scratching as the Mediterranean breeds.

They have calm and docile personalities, and are not flighty or skittish. They are not aggressive with other breeds and because of their size are not usually intimidated. Although they are friendly with people, their size can intimidate smaller children. Due to their size, they can require a lot of feed.