Characteristics:
Good foragers. Be sure to get stock from a reputable breeder so you don’t get a Broad-breasted White/White Holland cross 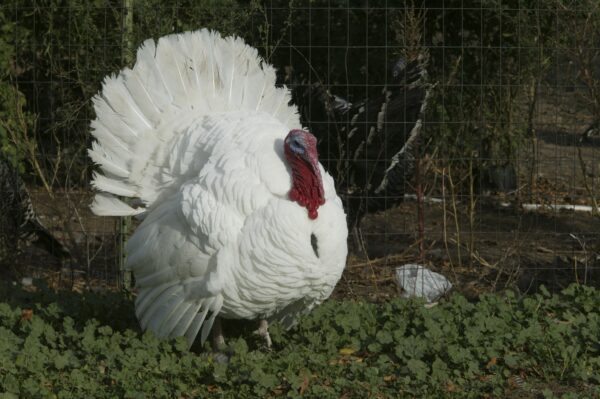 The mutation to the white color – which is actually a lack of color – is an ancient one. The Aztecs and others selectively bred white turkeys, which were certainly among the stocks sent to Europe. In Austria and in Holland, white turkeys were favored. It’s quite possible, though not documented, that Dutch settlers or other European immigrants came to the Americas with White turkeys. By the 1800s, a white variety – now called the White Holland in the show ring – was known in the United States. It was recognized by the American Poultry Association in 1874. The name White Holland implied Dutch origins for the variety but it’s an American breed developed from white sports of the Bronze turkey variety. The White Holland became a popular variety, especially in New England, holding its own well into this century. Though less numerous than the Bronze and smaller in size, the White Holland matured earlier and offered a cleaner carcass than dark-colored birds.

Producers, however, came to want the best of both worlds – a large, white-feathered variety. In the early 1950s, researchers at Cornell University and elsewhere in the U.S. began crossing the White Holland and Broad-breasted Bronze. By the 1960s, the Broad Breasted White (or Large White) had surpassed the Bronze for commercial production. This variety dominates the turkey industry today.

The White Holland is a distinctive and historic population that’s close to extinction. White Holland turkeys are seen occasionally at poultry shows, but they often have wide breasts and short legs, reflecting genetic influence from the Large White. The American Poultry Association both recognized this fact and confused the issue in 1983 when a change in the White Holland standard added the following: “Maybe referred to in commercial terminology as Broad-breasted Whites or Large Whites.” Thus the two varieties have merged, with the White Holland absorbed into the Large White. The same thing has occurred in Britain, with the lumping of all white varieties into a population called the “British White” turkey.

The White Holland turkey is showy in appearance, with snow-white feathers and a red to bluish head. The beard is black, the beak is pink to horn colored and the throat and wattles are pinkish-white. Shanks and toes are pinkish-white, and eyes must be brown. The standard weight for a young tom is 25 pounds and 16 pounds for a young hen.

Temperament:
Highly dependent on selection by breeder, some select for aggressive, others docile