Characteristics:
Too large to fly. Active foragers. Like people.

The Standard Bronze has been the most popular turkey variety for most of American history. It originated from crosses between the domestic turkeys brought by European colonists to the Americas and the eastern wild turkeys they found upon their arrival. The hybrid vigor of this cross resulted in larger and more vigorous turkey stocks than European birds. These birds were also much tamer than wild turkeys. The coppery, bronze-colored metallic sheen, which gives the variety its name, was part of the inheritance from its wild ancestors. 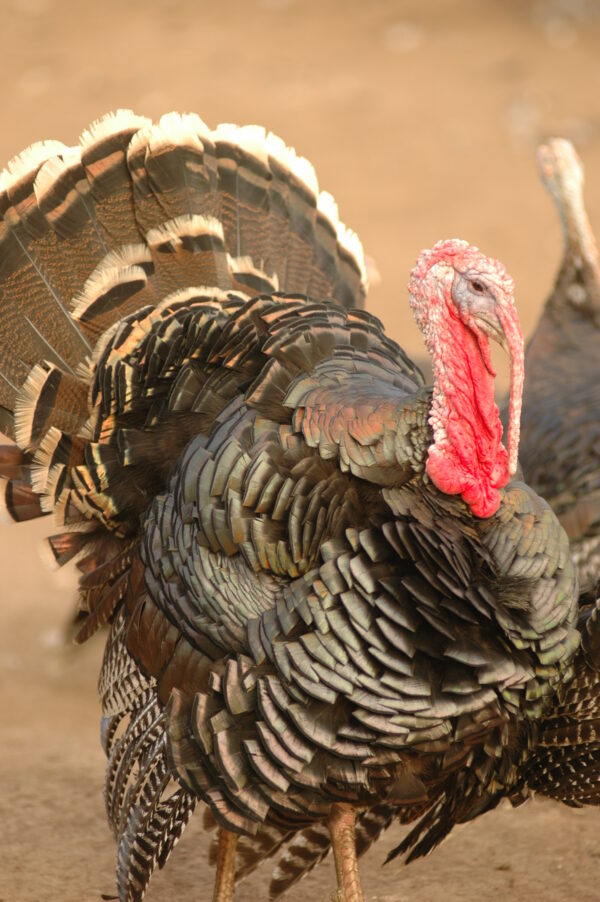 Bronze-type turkeys were known by the late 1700s, but the name “Bronze” did not formally appear until the 1830s. Throughout the 1800s, breeders standardized the Bronze, and occasional crosses were made back to the wild turkey. The Bronze variety was recognized by the American Poultry Association in 1874.

Naturally mating, long-lived, slow-growing strains of Bronze turkeys, known as the Standard Bronze, have been left even further behind by the turkey industry. A few tenacious breeders maintained small flocks, participating in poultry shows, and raising a few for family and friends. The Bronze was not used for commercial production for decades until the early 21st century, when renewed interest in biological fitness, survivability, and superior flavor captured consumer interest and created a growing market niche.

The Bronze variety is stately and imposing in appearance. The standard weight for young toms is 25 pounds and 16 pounds for young hens. Since, however, the Standard Bronze has not been selected for production attributes, including weight gain for years; so many birds may be smaller than the standard. Careful selection for good health, ability to mate naturally, and production attributes will return this variety to its former stature. Broad Breasted Bronze turkeys are also in need of conservation. Only a few hatcheries maintain breeding flocks, and many of these are reducing their number. Marketing strategies need to be developed for each type that does not undermine the other.