Texas Longhorn cattle have been a fixture of Texas life beginning with the earliest missions established by the Spanish when they first arrived in the area. These early settlers brought with them their tough and resistant cattle, whose roots went back to the south of Spain. Cattle were used for oxen, hides, meat, and milk. In the 1830s, political control of Texas switched to Anglos, and during the Civil War, cattle management essentially ceased. Leaving cattle to run totally free. After the war, vast herds became the source of Texan wealth and recovery as cattle were trailed north to satisfy the demand for beef that came with industrialization and a growing nation. 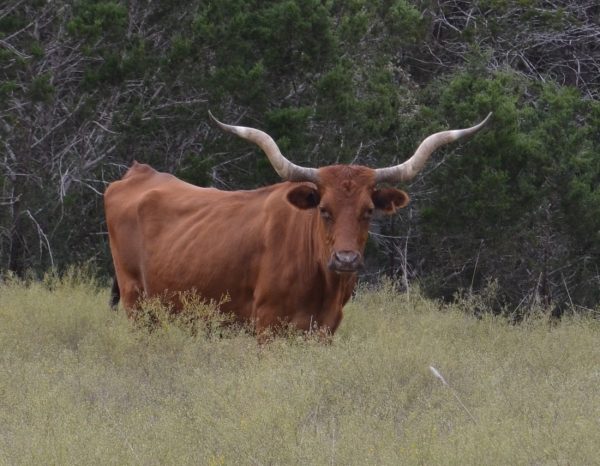 In the 1900s, “improved” British, European, and Indian cattle breeds were imported to the region to boost beef production, and the Texas Longhorn declined in popularity. This influx of these new breeds has nearly caused the extinction of many of today’s heritage breeds. Fortunately, Longhorns have always been connected with Texan identity, so some ranchers always kept herds going. In the 1960s this effort was organized and expanded, but the name “Longhorn” drove selection so much that purity became diluted. Selection began favoring horn growth at the expense of other traits as well as breed purity. As a reaction to the perilous situation facing the traditional breed, a few breeders organized the Cattlemen’s Texas Longhorn Registry and began a quest for the old, traditional pure Texas Longhorn cattle.

The traditional purely Iberian (Spanish) Texas Longhorn shares traits and appearances with many Criollo breeds from throughout the Americas that descend from the same roots. The cattle are rangey, and cows and steers have long, twisty horns. They are valued for their reproductive ability (cows routinely calve at 11-month intervals if given the chance) and longevity (cows in their late teens are not unusual).

Colors vary, with attractively speckled hides occurring as often as solid colors. The breed’s origin in southern Spanish makes their genetic relationship to other British, European, and Indian breeds in North America distant, so crossbreeding with these breeds results in great hybrid vigor in the offspring. Often, credit for this vigor has been given only to the “improved” breeds, while heritage breeds like the Texas Longhorn are seen as a relic of older times. The Texas Longhorn’s combination of no-nonsense traits, however, can work to its advantage for sustainable beef production.