Characteristics:
Great urban chicken that does little damage to grass or plantings

The Sultan chicken originated in southeastern Europe the 14th century Ottoman Empire but were bred in Turkey under the name Serai Täook, translated “Sultan’s Fowl” or “Fowl of the Sultan.” (Serai means “Sultan’s palace” and Täook means “fowl.”) Legend has it that Sultan chickens were used as living ornaments in the gardens of Sultans.

The Sultan chicken has been a rare breed since its arrival in England in 1854. Elizabeth Watts of Hampstead, England, and the editor of the London-based Poultry Chronicle received the fowls from a friend who was living in Constantinople. She wrote that the birds arrived in dreadful condition – dirty and mud-stained with feathers matted together. It was months later, once the birds had a chance to molt their ruined feathers, before she could see they were pure white. The original importation documentation notes that the birds did less damage to grass runs than would be expected of Cochin or Brahma – their runs remained green. 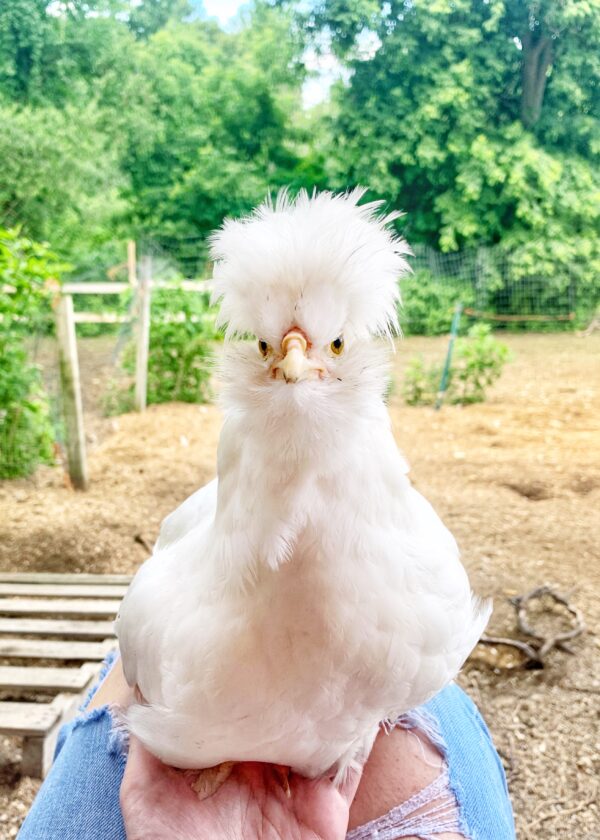 The first Sultan chickens came to America in 1867. A woman in New York sent them to author and poultry expert Geroge O. Brown, who wrote that the chickens were the tamest and most contented birds he ever owned. He noted that they were fonder of grains and insects than vegetables, and that they “almost constantly” sang that contented chicken song.

White Sultans were included in the first American Poultry Association Standard of Perfection (then called the Standard of Excellence) in 1874. They almost went extinct in the 1930s and remain rare today.

The Sultan is unique in that it has more distinguishing features than any other breed: a V-shaped comb, crest, beard, muffs, large nostrils, white or pale flesh colored beak, reddish-bay eyes, wings carried low, vulture hocks, feathered shanks and toes, and five toes on each foot. The wings are held drooped in a way that obscures the thighs and upper hocks. Sultans are pure white in color and have slate blue shanks and toes. They tend to stand somewhat erect. Males weigh 6 lbs. and females weigh 4 lbs.

Sultan chickens lay 50+ small white eggs a year, are non-sitters, and once had a reputation of being a good table fowl – the breast being large and the flesh being delicate and white. Early breeders made outcrosses to Polish chickens to add new blood. The breed has only one recognized color – White. Blue and Black Sultans are likely due to crosses made with Polish chickens.

Sultan chickens are wonderful pets and yard ornaments, but they need a lot of care. Due to their crests, they are subject to predation. They do not do well in cold climates where they can get wet – they are subject to frostbite. They do well in confinement, and with cool water and shade they do better in warm climates. They are also often bullied by more assertive breeds, so should be kept with breeds of similar temperament. They like people and like to be held, and roosters are not usually aggressive. They are chatty but not loud. They are delicate foragers and prefer grain and insects to vegetation.

Characteristics:
Great urban chicken that does little damage to grass or plantings