The Spitzhauben, also known as the Appenzeller Spitzhauben, originated in Switzerland’s Appenzell district sometime in the 16th century in local monasteries, and is considered the national chicken of the country. Their name comes from the forward sweeping crest feathers that are reminiscent of the ceremonial hats, “spitzhauben,” the pointed hoods once worn by women of the region.

The breed nearly went extinct after World War II. German breeder, Kurt Fischer, imported birds of all three of the original colors (black, golden spangled, and silver spangled) to Germany in 1953, and in doing so is credited with saving the breed. 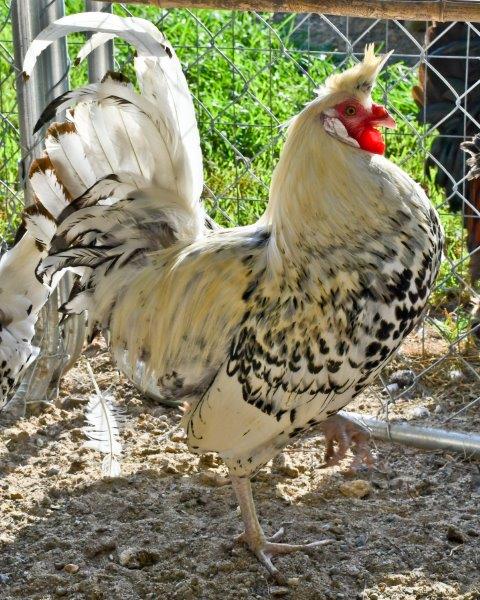 Silver spangled Spitzhauben were imported into the United States in the 1950s; this is the most common color in the US today.

The breed, though small, produces 150-180 of medium-to-large-sized white eggs each year. They lay almost all year, and can continue to lay in the winter, unlike many other breeds. They can be broody and are excellent mothers.

Spitzhauben have a bright red, V-shaped comb, blue legs, and white skin. Their plumage is silver spangled, gold spangled, black, blue, or chamois spangled. Most Spitzhaubens in the US are the silver spangled variety, with white plumage and black markings. Their feathered crest doesn’t impede their vision. Roosters are 4.5 pounds and hens 3.5 lbs.

Although the breed isn’t yet recognized by the American Poultry Association, efforts are underway to develop a standard and to conserve these striking poultry. It is recognized in the UK.

Spitzhaubens are active and alert birds. Their flighty nature doesn’t lend itself well to confinement, and they can fly, so you may need to cover their run. Because they are small, they can be attacked by a wide range of predators. They will roost in trees if not trained to go into a coop at night. They’re both heat and cold-tolerant and are great foragers. They don’t seem to mind cold weather, and the Silver spangled variety blends in with the snow (which many of them enjoy). They can also fare well in hot and humid climates.

The personality of these birds depends on their strain, with some birds being more wild and some more friendly. They may not be a good choice if you have children because of their flightiness. They are not known to be an aggressive breed, and their small size may cause them to be picked on by other breeds if they are in a mixed flock. If they are being kept with other breeds, it is best to make sure they have a lot of space to get away from other chickens, if necessary.