While most early texts state that Slate turkeys originated from a cross of the Black turkey on a white turkey, there is little genetic evidence to support such a conclusion. The slate gene is a legitimate mutation that arose, similar to how the gene for blue in the Andalusian chicken is the result of an unrecorded mutation. One added element of confusion in defining the variety is that there are actually two different genetic mutations – one dominant and one recessive – that produce the blue slate color, and these produce slightly different shades. White and rusty brown markings may be present but are considered a defect. 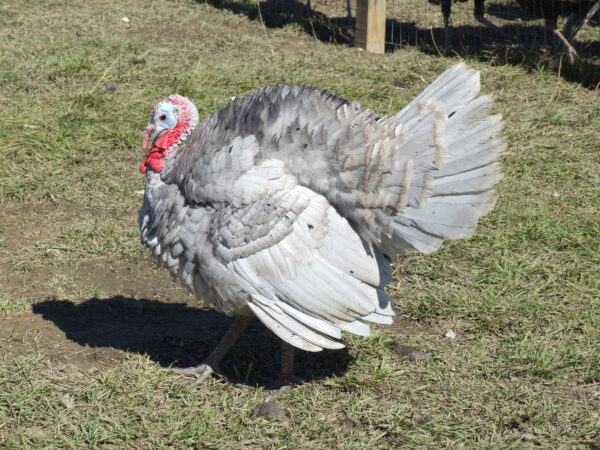 The Slate, or Blue Slate, variety is named for its color, which is solid to ashy blue over the entire body. They may also have a few black flecks. It’s also called the Blue or Lavender turkey, with hens being lighter in hue than toms. The head, throat, and wattles are red to bluish-white. Their beak is horn in color, their eyes are brown, and their beard is black. The shanks and toes are pink.

The Standard weight for a young tom is 23 pounds and 14 pounds for a young hen. Since, however, the Slate hasn’t been selected for production attributes, including weight gain, for years, many birds may be smaller than the standard. Careful selection for good health, ability to mate naturally, and production attributes will return this variety to its former stature.

The Slate was accepted by the American Poultry Association in 1874. It’s been popular in exhibition circles and is gaining popularity in pastured poultry production. Renewed interest in the biological fitness, survivability, and superior flavor of the Slate has captured consumer interest and created a growing market niche. The Slate is less well documented and more variable in type and color than any other variety. This makes it more challenging to breed consistently than the others. Its production potential today isn’t known.