“This big, colorful duck was developed by Reginald Appleyard at his famous Priory Waterfowl Farm near Bury St. Edmund, England. His goal, as stated in a 1940s farm brochure, was to make a beautiful breed of duck, with a combination of beauty, size, lots of big white eggs, and a deep long, wide, breast.” (Holderread). Silver Appleyards were brought to the United States in the 1960s and became available to the public in 1984. The American Poultry Association accepted the breed for inclusion to the Standard of Perfection in 2000. 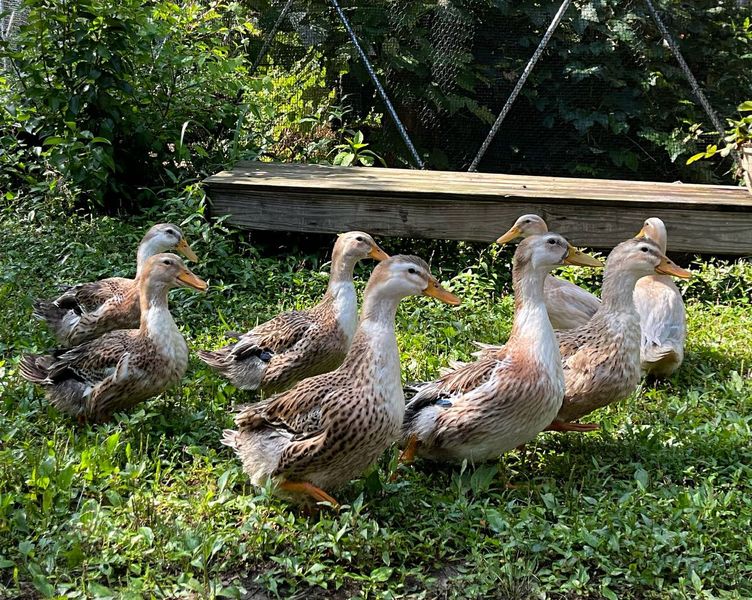 The Silver Appleyard is a large, sturdily-built duck that weighs between 8-9 lbs. This breed’s carriage varies from 15-25 degrees above horizontal and its body has a “blocky” conformation. The drake’s bill is greenish or yellow with a black tip, his eyes are brown, and his head and neck are greenish-black, sometimes exhibiting striping with age. The breast, sides, shoulders, and flank on a drake are reddish-chestnut with white frosting and lacing, his underbody is creamy or silvery-white and his wings are gray and white with bright blue cross-stripe. The tail is blackish bronze, and the legs and feet are orange. The female’s bill is yellow or orange with a black bean, her eyes are brown, and all plumage is generally whitish with gray, brown, fawn, and buff markings with a blue cross-stripe on the wings. The legs and feet are orange with dark toenails.

“Applyards are being raised for exhibition, pets, decoration, eggs, and gourmet roasting ducks.” (Holderread) They are one of the best layers among the heavyweight ducks, averaging 220-265 white-shelled eggs per year. Appleyard meat is lean and flavorful. They’re active foragers with calm temperaments and will tend to stay close to home if well fed.

When choosing Appleyards to breed, select robust, active, and strong-legged birds that have a record of good egg production. Many Appleyards are undersized, so select birds with big, well-muscled bodies and avoid excessively large birds that will have trouble foraging, mating, and laying.