Red Poll cattle are a dual‑purpose breed developed in eastern England in the early 1800s. Red Polls resulted from the combination of the Norfolk and Suffolk cattle breeds. The Norfolk was a small, hardy, red and white horned breed known for the high quality of its beef. The Suffolk was a red, yellow, or brindle polled dairy breed. The resulting breed was recognized in 1846. Its original name “Norfolk and Suffolk Red Polled cattle” was shortened to Red Poll in about 1880. Breeders selected their cattle for beef and dairy qualities, creating a population that was consistent in appearance, dark red in color, and always polled. A herdbook was established in 1874. The Red Poll remained strongest in its home counties of Norfolk and Suffolk and did not become widely distributed in England. It was, however, exported to several other countries beginning in the late 1800s. 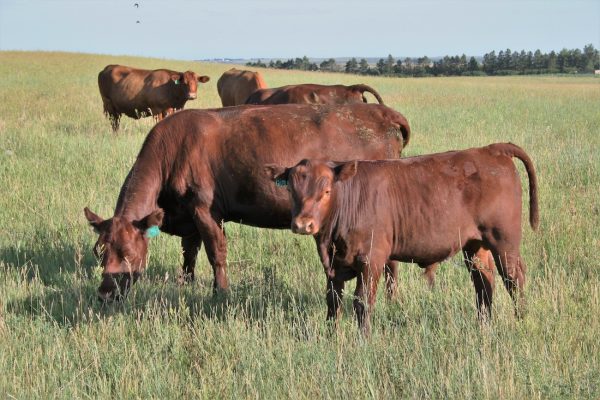 Red Poll cattle were first imported to America in the 1880s, with importations continuing through the 1930s. The American Red Poll Association was founded in 1883, five years before the English breed society. Red Polls were efficient and competitive dairy cows, especially where total profit over feed costs was measured. They were also known for longevity, often producing 10,000 pounds of milk per year even as teenagers. One cow, Florabel (10862) had an eleven-year milk total of 108,310.5 pounds in 1933, which was an all-breed record for the time.

Though these dual-purpose qualities were valuable, American breeders have emphasized the beef characteristics of the Red Poll, especially since the 1960s with the Holstein’s dominance in the dairy industry. The Red Poll has responded well to this selection. In studies conducted at the Meat Animal Research Center in Clay City, Nebraska, the Red Poll led all breeds in 200‑day calf weight per cow bred. Red Polls accomplish this by superior fertility, calf vigor, and calf growth rates. Calves are small at birth but grow quickly on their mother’s milk. The breed has also been praised for the quality of its beef.

The breed is endangered and it’s declining in Britain, North America, and globally. Large numbers of Red Poll cows are being lost to the population through their use in herds of commercial cattle and in some other breeds. The Red Poll must become more widely recognized to survive. Fortunately, the breed has a great deal to offer. Its long history of pure breeding has given them exceptional genetic consistency. Bulls are prepotent, and their offspring are highly predictable and uniform. Distantly related to most other beef breeds, the Red Poll can impart significant hybrid vigor when crossed. The breed was, for example, a foundation of the Senepol breed, developed in the 1900s in the Caribbean. Crossbreeding serves the breed’s interests when bulls are used and can then be acknowledged for the quality of the offspring they produce. Cows, however, must be bred pure to ensure the breed’s survival, which means that Red Polls must also maintain their niche as a purebred. This should not be difficult, as the breed is well suited for the production of grass-fed beef.

Red Poll cattle are medium-sized, with cows averaging 1,200 pounds and bulls 1,800 pounds. The cattle are solid red, with a little white on the underline tolerated but not desired. They are adaptable and long-lived. Red Polls have quiet dispositions and they are an excellent choice for rotational grazing and other systems where ease of handling is required. Cows can also be used for small-scale and home dairy production. The milk is high in protein and butterfat, making it especially good for cheese. In England, Red Poll cheese is still produced. Wherever these qualities are valued, the Red Poll breed merits attention.