Temperament:
Docile; can be assertive

The Randall Lineback is a purebred remnant of the lineback-patterned cattle once common in New England. Though their origins aren’t clear, it is likely that they originated in New England from a combination of Dutch, English, and French cattle breeds. Historically, Linebacks were multi-purpose, used for dairy and beef production and as oxen. This made them an integral part of rural New England life for several centuries. There was no formal breed organization except for the brief existence of the Columbian Breed Association in the early 1900s. Most of the Lineback’s population was lost over the last century through crossbreeding with Holsteins. 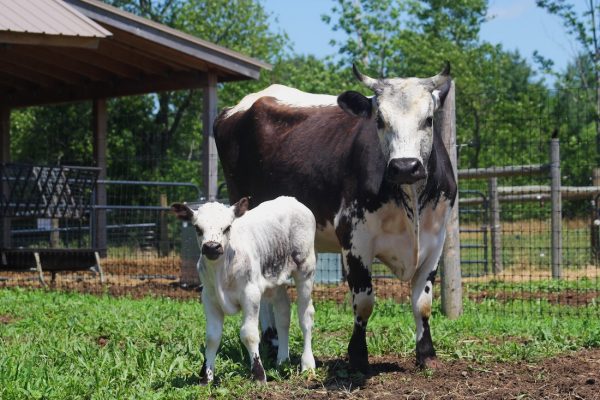 The name Randall comes from the Randall family in Vermont who kept a closed herd of Linebacks for over 80 years. The Randall herd was one of the few Lineback herds that wasn’t crossbred with Holsteins. However, after the death of Everett Randall, this herd was dispersed and most of the animals were lost to slaughter. Through a convoluted pathway and with the efforts of Livestock Conservancy members, a small part of the herd was saved and has been the foundation for conservation of the breed.

The “lineback” part of the breed’s name describes their lineback color pattern. The cattle are blue-black with a white strip down their backs. The roan coloring on their sides varies from almost black to nearly white, with black noses, eye rings, ears, feet, and teats. Between the extremes are many animals that are blue roan or speckled. With increased breeding, additional colors have been observed, and herds now may contain some blue, gray, or recessive red animals. All color variants are stunning, especially against a background of green grass.

Randall Linebacks are medium-sized, horned cattle. Cows weigh 600-1100 lbs. and Bulls 1000-1800 lbs. Some variation in conformation does occur, but the majority most cows have dairy conformation and well-developed udders. They are good mothers and can sometimes be fiercely protective of their calves. In some herds, family lines are discernable. Bulls are large and demonstrate good growth rates. A few steers have been trained and excel as oxen. Their unusual color, willingness, and ability make them attractive and capable draft animals. Randall Lineback cattle do have an assertive side, so it is best that they be handled often.

Randall Lineback cattle are critically rare and are being closely managed to increase numbers and maintain genetic health. The breed is more secure now than in the recent past, although additional breeders would ensure its continued survival.