Temperament:
Calm, but flighty when disturbed

Birds that look like Polish chickens appear in paintings by Dutch and Italian artists as far back as the 1400s and through the 1500-1700s. They were also mentioned in literature of the same period. However, their exact history is unknown. It is possible that their ancestors came to Central and Eastern Europe with Asian Mongols in the Middle Ages, so they could have originated in Poland. 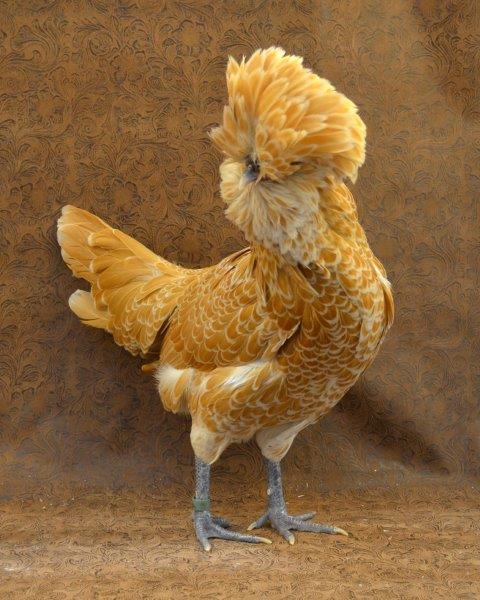 Other poultry historians believe that Polish chickens were brought from Spain to Holland when the Spaniards occupied the lowlands in the late 16th century. Either way, credit is given to the Dutch fanciers of the eighteenth century for refining the color patterns and developing the crests of Polish chickens.

The bird has been known by various names including “Poland”, “Tophat” and Paduan. Charles Darwin classified any chicken with a crest as a “Polish” or “Crested” chicken, most likely due to the resemblance of the feathering on the head of the bird to the sprouting crests on the feathered caps worn by Polish soldiers. Another theory is that the bird’s name was based on the Dutch word “Pol” meaning “large head.”

Polish chickens were known in England during the 1700s and were popular in France for egg production. They are believed to have arrived in America between 1830 and 1840, and by 1850 they were widespread.

With the rise of Leghorn chickens in England and America in the 1850s through the 1890s, Polish chickens lost favor as egg producers and were maintained for exhibition purposes.

Polish chickens have many interesting characteristics. The crest is supported by a bony prominence on the skull. A Polish hen has a tidy “pom-pom” hairdo; the rooster has an untidy mop of feathers. The feathers of both sexes can sometimes fall over the chicken’s eyes and impede its vision. Thus, this endearing feature can cause these birds to be prone to aerial predation. Polish chickens are easily surprised and a bit nervous, so care should be taken not to startle them. They may also be bearded, with feathers on their faces.

Males have a red v-shaped comb that may not be visible because of the head feathers. They have white earlobes and red wattles. They also have very large nostrils. Their gray legs do not have feathering, and they have four toes on each foot.

They lay about 150 medium-to-large, white eggs a year, tending to begin a bit late in the season but persistently laying once they commence. Polish hens are non-sitters and rarely will go broody. They are similar to Leghorns in both size and type. Males weigh 6 lbs. and females weigh 4.5 lbs. They have white skin.

Polish chickens prefer a dry, warm climate, and are heat-tolerant if they are provided with shade. They do not do as well in cold weather because their crests can become waterlogged and cause the birds to be chilled. The crest feathers can also get frozen in icy weather. You must keep Polish chickens in a well-ventilated, dry chicken coop.

They are a friendly breed, but it is best to talk to them when you approach because with their crests, they may not know you are there and fly away. As they are a lightweight breed, they are good flyers and can sometimes be found in the branches of trees when it is time to roost.

Temperament:
Calm but flighty when disturbed