Temperament:
Extremely active and flighty; not for children

The Old English Game chickens descend from ancient fighting cocks and have changed little in shape or appearance in 1,000 years. Game fowl were introduced to England by the Romans in the 1st century creating a long history of cock-fighting for sport in the region. As an affordable sport, it attracted participants from all walks of life. Cock-fighting was even introduced into British public schools in the early 1800s to inspire adolescence with the endurance, strength, and courage displayed by these birds. Anyone could raise chickens, and cock-fighting was extremely popular there until it was banned in 1849. 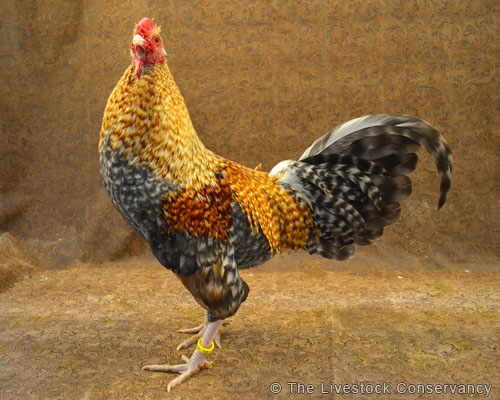 Now raised for their exotic appearance, the breed’s history is imprinted in its appearance. Game fowl have specific adaptations suited for their former life in the ring. The traditional Old English has a compact, muscular body and broad shoulders. They come in a variety of colors, and their feathers are tight to the body to prevent a competitor from grasping them in its beak. The tail feathers are broad and strong, making the tails both large and distinctive, especially the curving hard, glossy feathers tail feathers of males. They also have large well-curved beaks, long necks with strong heads, fearless eyes, and indomitable spirit. The comb and wattles of male birds are trimmed early in life, a practice referred to as dubbing that is required for show birds, though may be falling out of favor.

The breed comes in a range of colors including Black, Dun, White, Spangled, Brown Red, Golden Duckwing, Brassy Back, and Black Breasted Red. Some Old English Game colors are not found in any other breed.

In the United States, Old English Games were selected for speed and are smaller, narrower, and softer-feathered than their British counterparts. They have white skin, a single comb with five points (that may be dubbed for showing), smooth, small, red or mulberry wattles and earlobes. Shank color varies with plumage, though they can have clean light blue legs with four toes that have sharp nails. Males usually reach 4 lbs. and hens 3.5 lbs.

Females lay 100-160, small to medium, white to tinted eggs a year. Egg production rate depends on their strain. They do go broody and make excellent, though sometimes overly aggressive, mothers. Male chicks should be separated no later than 6 months as they will fight with one another.

They can tolerate cold, but do not do well in hot climates. They are good foragers and do well in free-range situations, but do not like to be confined and being caged will cause them distress. Due to their great stamina, they can easily fly and escape enclosures They like to roost in trees. They do not do well in a mixed flock as they will be aggressive with other breeds, and there should only be one rooster with a flock of Old English Game hens as multiple roosters will fight. They are a noisy breed.

Because of their excellent muscle distribution, Old English Game can make a good small table bird, although some say the meat has a gamey taste. They’re long-lived with some birds living f15 years or more.

Although chicks can be handled to make them more people friendly, this is not a good choice for a beginner, as a family breed or for children. Today, most Old English Game chickens are raised by experienced breeders for exhibition.