Temperament:
Alert; can be assertive

Notes:
Inspiration for the formation of The Livestock Conservancy; good option for a family cow; able to thrive in rough conditions

In the mid-1970s, during preparation for the American Bicentennial Celebration, Old Sturbridge Village and Plimoth Plantation attempted to upgrade the authenticity of their agricultural interpretation by exhibiting appropriate breeds documented in their respective archives. The historic documentation indicated that Milking Devon cattle should be one of the centerpiece breeds. The difficulty in finding this once popular breed was the inspiration for the creation of the first North American livestock conservation organization, which has become The Livestock Conservancy.

Devon cattle come from the southwestern peninsula of England, where the breed was developed over several centuries. The name comes from Devonshire, though similar cattle were also raised in the neighboring counties of Cornwall, Somerset, and Dorset. Devons were valued for the production of both high-quality beef and the rich milk used in Devonshire cream. They were also regarded as the quickest and most active oxen in the British Isles, reputed to trot at six miles per hour while pulling unladen wagons. The breed had the reputation as an easy keeper, able to thrive on rough forage. 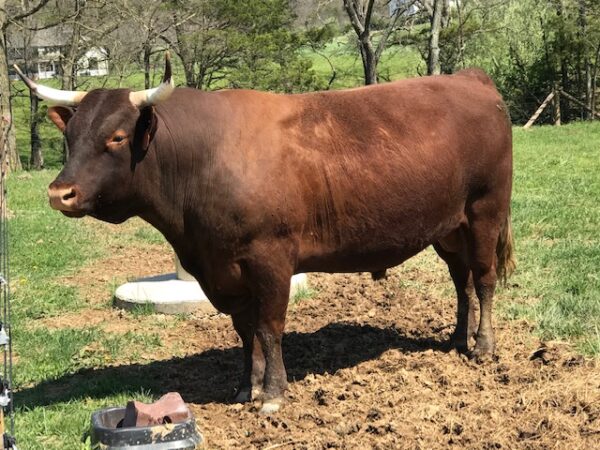 The Pilgrims brought Devon cattle with them to New England beginning in 1623. Devons were readily available near the ports of departure from England, and the hardiness and practicality of the breed made them an obvious choice for American settlers. The breed became well established in New England during the 1600s and spread down the coast as far as Florida during the 1700s and 1800s. Cattle also went west, as Devon oxen were among the draft animals of choice on the Oregon Trail. Herd books for the breed have been published since 1855.

By the late 1800s, the Devon had gradually been replaced by the Shorthorn, a more productive multi-purpose breed. By 1900, Devons were rarely seen outside of New England. It was only in this region that the breed remained popular, continuing to be valued for hardiness and the ability to thrive under rugged conditions, qualities in which it was superior to the Shorthorn.

During the mid-20th century, however, the breed faced pressure to specialize as a beef animal, and this population is now called the Devon, Beef Devon, or Red Devon. A small group of breeders disagreed with this trend and founded a separate organization to preserve dairy and draft traits in their cattle. Although this organization later disbanded, many of the genetic stocks were saved and in 1978, the American Milking Devon Association was formed to record and conserve the original, colonial-type cattle. The persistence of these New England dairy farmers and teamsters protected the breed from extinction.

(Interested in the history of Devon cattle in the United States? Read this article, which first appeared in the Devon News, courtesy of Jeremy Engh.)

Today, there are over 500 Milking Devon cattle in existence and the population is stable. The breed is a favorite exhibition animal at historic sites because of its attractiveness and well-documented history.

Milking Devon cattle are red with black-tipped white horns. Cattle are medium in size, with cows averaging 1,100 pounds and bulls 1,600 pounds. The appearance is compact yet fine, with a straight topline, square set legs, and well-formed udders. They are well adapted to low-input management schemes and harsh environments. They typically have very few calving difficulties, and many are very productive milkers for the family farm. Milking Devons are still prized as draft animals.

Notes:
Inspiration for the formation of The Livestock Conservancy