Oliver Drake and M. C. Gower-Williams of Wales are credited with developing the charming Magpie duck. Because of its size, somewhat upright carriage, and plumage pattern, it is believed that Magpies may descend from Runner ducks and the Huttegem, an old Belgian duck breed with possible Runner breed ancestry that was raised during the 1800’s. Old paintings from the time show birds that are very similar to modern Magpies. The Magpie was entered in the British Waterfowl Standards in 1926. Isaac Hunter of Michigan imported Magpies to the United States in 1963 and since then, Magpies have been kept alive by a handful of breeders in America. The American Poultry Association recognized Magpies in the Standard of Perfection in 1977. 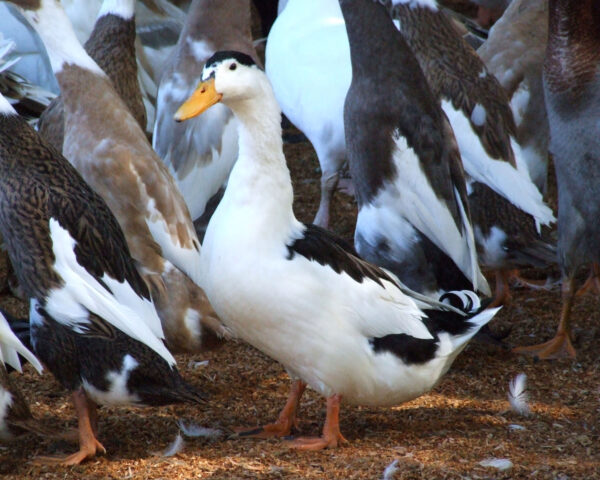 The Magpie is a light breed, reaching a weight of 4-5 lbs. They are named for their distinctively marked plumage – predominantly white with a colored cap on the crown of the head, and a large colored patch extending along the back from shoulders to tail. As the duck ages, the cap becomes white-flecked and it may eventually become totally white.

The Magpie is a long-bodied bird, with a broad head and a long orange or yellow bill that may turn green in older ducks. They have orange legs and feet that may be mottled. Their body carriage is 15-30 degrees above horizontal when relaxed, and slightly higher when agitated. Standard varieties include Blacks and Blues. Some breeders have also developed non-standard color varieties.

“Because the genetics of Magpie coloration is complex, breeding good show specimens is a challenge. Color patterning of ducklings will not change as they develop to adults, so breeders can select good specimens for breeding while using other ducklings as utility birds.” (Holderread).

Magpies are active foragers that graze and hunt for a sizable portion of their feed from grass, seeds, insects, and aquatic life. They eagerly search for and consume slugs, snails, and insects; so much so that keepers of large livestock farms find that these ducks are effective at eliminating liver fluke infestations.

Magpies are good layers and will produce 220-290 greenish-blue, brown speckled eggs yearly. Their eggs hatch, on average, a week earlier than other duck breeds. Magpie hens may get broody, but this is not typical for the breed. However, they are generally good and attentive mothers once the eggs hatch. Magpie drakes may use their bills to move hatchlings if they find them to be moving too slowly. Magpie ducklings imprint on their keeper(s) more than those of other duck breeds, especially if they are a lone survivor or if other ducklings hatch later.

“When choosing breeders, select robust, active, strong-legged birds from families known for high egg production. Laying ability and egg size are strongly influenced by the father and therefore it’s prudent to choose breeding drakes from high-producing families. The drakes have a high libido, therefore the ratio of drakes to ducks in a flock should be no more than 1:5 or so.” (Holderread)

Their meat is of gourmet quality. Carcasses will pick cleanly because of their light-colored under-bellies, and each bird will yield portions suitable for two to three people. Magpies tend to have high-strung dispositions. If they are handled when young, they can be friendly birds that get along with other animals and will like to interact with adults and children.

While generally at home on land and not capable of sustained flight, they can propel themselves over a 2-3-foot wall if startled. They are active foragers if given room and a pond to do so. They are a healthy breed. They are usually quiet but will be loud if they feel threatened. In addition to quacking, they make a variety of other noises. They do well in most weather conditions. Overall, this is a good breed for beginners.