Runner ducks have a long history as evidenced by ancient Javan temple carvings indicating that Runner-type ducks existed in Indochina 2,000 years ago. People in India and Indonesia have been herding ducks for hundreds of years. Flocks of ducks, trained to stay in sight of a herder’s long bamboo pole with cloth strips attached to one end, were driven out to rice paddies and fields during the day to glean scattered grain, weed seeds, snails, insects, larvae, small reptiles, and the like. The herder then drove their flock home at night and kept them in a protective bamboo or clay enclosure. In the morning, eggs were gathered, and the herder then set off again with his ducks for another day’s foraging. Over many centuries, these conditions selected ducks that were good walkers, excellent foragers, and prolific layers. These specially-adapted birds were introduced to the United Kingdom from Malaysia by a ship’s captain around 1850. Their high egg production and unique appearance caused Runners to become widely popular in their new home. British artist Harrison Weir included the breed in his 1902 book Our Poultry and All About Them and called them “Penguin Ducks,” and when they were first imported to the US they were often known by this name. In the US, they were a popular breed with homesteaders in the late 1800s. 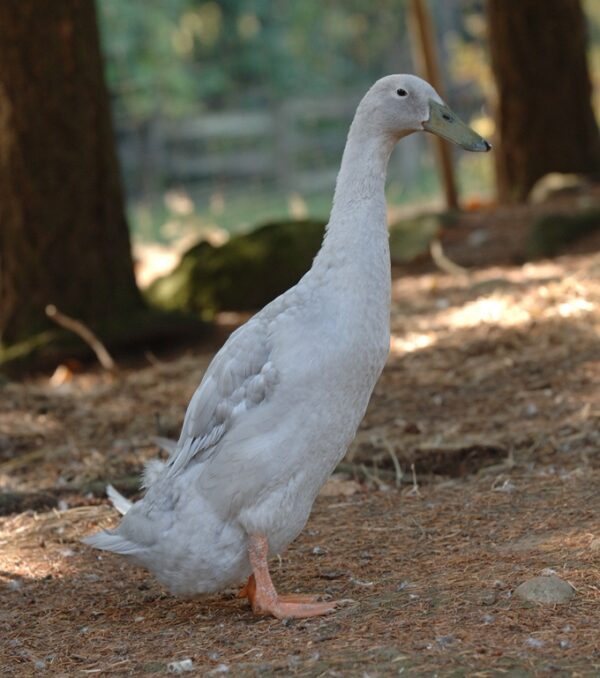 Unfortunately, the breed was crossed with other domestic ducks in Europe and almost disappeared as a breed there by the early 1900s.

The Runner, also known as Indian Runner, weighs 4-4.5 lbs. Their slim bodies and long necks have prompted the description of a “wine bottle (or bowling pin) with a head and legs.” Its head is slender with eyes set high, the bill is straight and light yellow or orange, or even black. Their legs are set far back on their bodies resulting in the upright carriage characteristic of the breed. Typical carriages are 45 to 75 degrees above the horizontal, but when agitated, some runners stand fully upright. Drakes have curly tail feathers, but the ducks do not. There are more color types of Runners than any other duck breed. Color varieties recognized in the American Standard of Perfection are Fawn & White, White, Penciled, Black, Buff, Chocolate, Cumberland Blue, and Gray. No matter what color they are, they have pink skin. Because of its small size, this duck isn’t valued primarily as meat bird, but many regard Runners as tasting similar to wild ducks.

Runner ducks are prolific layers and good strains will lay over 250 white, hen-sized eggs per year. Indian Runner ducks rarely go broody, although they will make a nest and use it. However, once the eggs hatch, they feel their job is done as they do not have good maternal instincts. So, if you want to raise the ducklings, you will need to put them in a brooder. Their active disposition is evident right from the start, reports breeder David Holderread. When taking hatched ducklings from the incubator, he must move slowly and talk to them quietly to keep them from jumping overboard in their enthusiasm to explore their new world. While not capable of sustained flight, Runners can scramble over a two to three-foot enclosure for food.

The most active forager of all breeds, they will cover a large area in search of snails, slugs, insects, and other edibles. Unlike some other breeds, they prefer to roam to forage, and although they can be kept in a run, they prefer a large space and will be vocal if they are not provided with one.

They are a “busy” and active breed that can be high-strung, so require work from the time they are ducklings if you want them to be comfortable with people. Although they can easily panic in response to any real or perceived danger, trained Indian Runner ducks are often used at herding competitions and are friendly.

They are a healthy breed and do well in both cold and hot climates. The ducks are generally louder than drakes and make a distinctive quack sound.

When choosing breeders, avoid ducks that have low body posture, short stocky bodies with prominent shoulders and chests; round heads with prominent foreheads; short bills and/or concave at the top line; and tails that are constantly cocked upward, even when the bird is excited. Look for strong legs and a smooth running gait, and choose birds that come from families with a history of good laying and foraging ability (Holderread).