Characteristics:
Good in both hot and cold climates; Have been used for herding competitions

Adele Campbell of Gloucestershire, England, developed Campbell ducks in the late 1800s with the goal of providing her husband and son a with a consistent supply of roast duckling. She crossed her Fawn and White Indian Runners (exceptional layers) with a Rouen to create offspring with bigger bodies that would still lay well.

“From this humble foundation, one of the world’s most prolific egg-laying breeds was developed. The Campbell was introduced to the public in 1898, originally resembling a poorly colored Mallard. To capitalize on the buff-colored poultry fad at the time, Campbell mated her original ducks back with Penciled Runner ducks. The resulting color, a slightly-off buff, reminded Campbell of British army uniforms, so she named them “Khaki Campbell.” (Holderread) 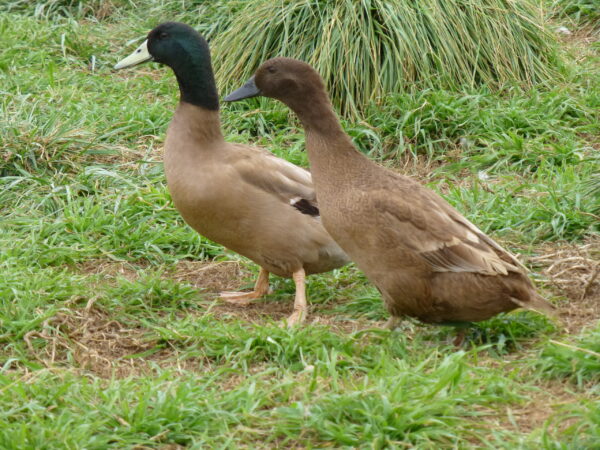 “Campbells made their way to the United States in 1929 through importation by Perry Fish of Syracuse, New York. By 1941, they were recognized by the American Poultry Association (APA) in its American Standard of Perfection, but their numbers languished for many years. This changed in the 1970s when Khaki Campbell numbers increased dramatically in the US due to a back-to-the-land movement, a surge of duck-egg-loving Asian immigrants after the Vietnam War, and the importation of a productive strain of Khaki Campbells in 1977.” (Holderread)

“The Campbell duck is a lightweight bird that weighs around 4-4.5 lbs. They are active, streamlined birds with a modestly long head, bill, neck, and body, and a sprightly body carriage of 20-40 degrees above horizontal.” (Holderread). There are four color varieties in North America: Khaki, White, Dark, and Pied, with Khaki being the only one recognized by the American Poultry Association.

“The Khaki drake has a green bill, rich dark-orange legs and feet, and dark brown eyes. Its head, upper neck, lower back, and tail culverts are brown-bronze while the rest of the drake’s plumage is a warm khaki. The Khaki duck has a green bill and dark brown eyes and its legs and feet are brown. The duck’s head, upper neck, and lower back are seal-brown and the rest of the plumage is khaki. Dark Campbells, developed in Europe in an attempt to provide sex linkage, are a darker version of the Khaki. The White Campbell, bred as a “sport” variety, is pure white with vivid orange legs, feet, and bill.” (Batty) The Pied has fawn plumage.

“Campbells are prolific layers and active foragers. Most lay their first eggs when 5-7 months old and will average 250-340 eggs of superb texture and flavor per year. With an age staggered flock, one may have eggs year-round. Campbells are high-strung and energetic, and need plenty of space to graze and forage.” (Ives)

“If they consume an adequate diet, are kept calm, provided sufficient space, and run in flocks consisting of no more than 50-200 birds, Campbells have proven to be amazingly adaptable. They have performed admirably in environments ranging from arid deserts with temperatures of 100°F, to humid tropical rainforests with more than 200” of annual precipitation, to cold Northern regions where temperatures can remain below 0°F for weeks at a time.” (Holderread)

When choosing breeders, select robust, active, strong-legged birds with a history of good laying and foraging ability. Make sure you acquire authentic Campbells that have been selected for egg production. Crossbreeds with telltale signs of facial stripes or weights above 6 lbs. may be sold as Campbells, but they don’t lay well.

Click the link to read more about Mrs. Campbell in “The Doctor’s Wife (~ or ~ Great Affectations).” by Jonathan M. Thompson:

Since the turn of the 19th century, the Khaki Campbell Duck has been renowned for its phenomenal production of large, white-shelled eggs; a period of 111 years to the present day, and yet surprisingly little has been known about the back-ground to either Mrs. A. Campbell or her creations, the Campbell and the Khaki Campbell Duck… Download full article (.pdf)