The Houdan chicken derives its name from a village in Yvelines, France, located west of Paris in Normandy. It is believed that the breed was developed over centuries using the common five-toed fowls that existed during the time of the Roman author Columella, 4 CE to 70 CE. These once-common fowl, which were present in France and Belgium, were combined with the old, crested race of chickens found in Caux, Normandy to create the Houdan breed. 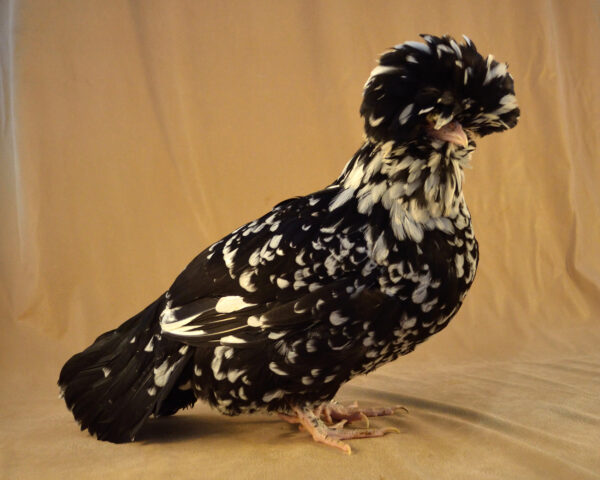 In the 1800s Houdan chickens were crossed with other breeds, including Crevecoeurs and Dorkings, to make them more productive and faster growing meat birds. They became popular table birds in France, and were historically held in high esteem for meat and production qualities, and they were also decent egg producers.

The first Houdan chickens were imported into England in the 1850s, and into America in the 1865 by a Mr. Dorose. In 1867, John B. Gough exhibited them in Worcester, Massachusetts. Houdans were accepted into the American Poultry Association Standard of Perfection in 1874. These birds were of the mottled variety. The White Houdan was developed in America by F.D. Baermen and was the result of crossing Mottled Houdans with White Polish chickens. White Houdans were recognized as an official color in 1914.

Sadly, Houdan chickens have since fallen out of favor, and by the beginning of the 21st century, they were almost extinct. The Livestock Conservancy has the breed listed as “Critical.” Hopefully, with more awareness of this delightful breed, numbers will increase even more. Hatcheries are starting to sell these chickens now (rather than just specialized breeders), so that’s a start.

Mottled white on a black background, Houdan chickens have both beards and crests and make a distinctive impression. They are medium-sized with a long, compact, and well-proportioned body. They have v-shaped combs in America, but historically, their combs were described as “leaf-shaped” – appearing like a butterfly with its wings open. They have large nostrils, white earlobes, reddish-bay eyes, five toes on each foot, and pinkish-white shanks and feet. Males weigh 8 lbs. and females weigh 6.5 lbs.

Without question, Houdan chickens are a useful and productive breed. The only curiosity is that it didn’t secure permanent popularity in either America or England. They are excellent layers of 150-230 large, white eggs a year – equaling Leghorn chickens in dry, sunny conditions – and are good winter layers. They may or may not be broody, depending on their strain. The chicks are easily reared and grow quickly. Houdan roosters are ardent and require a large flock of hens, but fertility is excellent.

Houdan chickens fatten easily, are of medium hardiness, and are noted for producing less offal than a Dorking chicken, but being just as fine for the table. The breed has achieved the sought-after “Label Rouge” certification for excellence in taste and production in France.

The breed does better in warm weather as, if their crests get wet in cold weather, they can freeze and the birds can get frostbite. They prefer warm and dry climates, but need shade in excessive heat. They do fine in confinement,  but they like to forage, so they do need enough room to roam about some. Be aware that those with large crests may not be able to see predators, so they will need to be protected or you may need to trim their crests.

They are a sweet, docile, friendly breed, although roosters may or may not be aggressive with people. Houdans are best kept with breeds with similar temperaments as they may be “picked on” because of their feathering. They are a good breed for children and they like to be cuddled.