Notes:
Forage efficient; calm temperament; productive; some have A2 genetics

Many cattle breeds have been developed because farmers in an area wanted to create animals that would fit a specific farming situation – a landrace breed. The Shorthorn is likely the most famous and influential breed of cattle in the history of agriculture worldwide. Early records show Shorthorn-type cattle dating back to the 1500s, and it was among the first livestock breeds to be improved, beginning in the 1700s. The Shorthorn was historically called the Durham because it originated in the county of Durham in northern England. Imported Dutch cattle were crossed with native stocks and were selected for both meat and milk production. In the late 18th century, Charles and Robert Colling began using selective breeding techniques introduced by Robert Bakewell that were used successfully with Longhorn cattle. 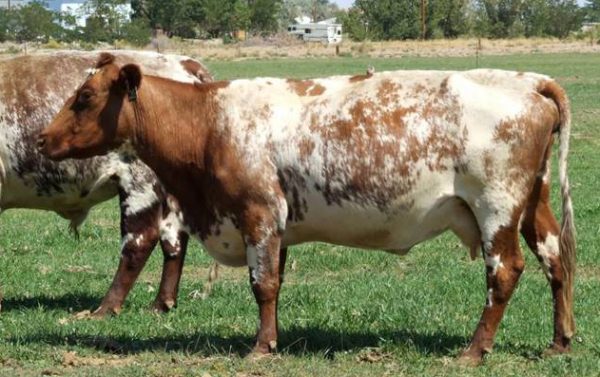 The breed became known early in the 1800s, mainly due to a traveling promotional exhibit of the famous “Durham Ox.” The Ox, calved in 1796, weighed over 3,500 pounds at ten years old and brought much acclaim to the breed. The story of the Shorthorn has been recorded in countless publications, and images of red, white, and roan Shorthorns dominate art from the period. Shorthorns were the first breed to have a herd book to record pedigrees. It was compiled by George Coates into the Coates Herd Book of 1822. All Heritage Shorthorns today can trace their origins to this herd book.

From the early 1800s until recently, Shorthorns were the most popular cattle in Britain and were exported around the world. Yet the breed is now in decline, and its rise and fall reflect the major changes in agriculture over the past two centuries.

Shorthorns were first brought to America in the late 1700s, with the largest number of cattle arriving after 1820. The breed was initially concentrated in Ohio and Kentucky, a region rich in grass and corn to feed cattle, but by the end of the 1800s it had spread throughout America. The Shorthorn was valued for its dairy and beef qualities and was also used as a draft animal.

Breeders have always differed in their view of the Shorthorn’s purpose, with some selecting for maximum dairy or beef production, while some selecting for a balance of the two. At different times, one type of selection would outweigh the other, and then the tide would swing back. For example, the Shorthorn first gained value in the US as the premiere dairy breed of the mid-1800s, though by 1900 the beef type “Scotch Shorthorns” were the most desirable.

Early in the 1900s, the breed was formally split into a beef type, called Beef Shorthorn or simply Shorthorn, and a dairy type called Milking Shorthorn-Native, now known as the Heritage Shorthorn. Most breeders favored selection for beef, and this trend has continued, especially with the rise of the Holstein as the dominant dairy breed. The Heritage Shorthorn (Native), despite its many fine qualities and history of dairy selection, could not compete with the quantity of milk produced by the Holstein, and the breed lost favor.

The Heritage Shorthorn is medium to large, with cows weighing 1,200-1,400 lbs. and bulls about 2,000 lbs. Heritage Shorthorns are red, white, roan, or a mixture of the three, sometimes with extensive speckling. Most cattle are horned. They are a docile breed. Shorthorns are excellent mothers, are very fertile, and calve easily. The breed is long-lived and is productive much longer than most modern dairy cattle. Some lines have A2/A2 genetics and high milk solids/butterfat levels that make them a good choice for niche market milk and cheese production. Because they have more muscle mass, the meaty bull calves are more saleable, and the carcass of spent cows is worth more than that of other dairy breeds. This breed is a good option for a small or large farm, as a family cow, and for farmers who want to become stewards of this useful breed.

Although there are several thousand Heritage Shorthorns (called Dairy Shorthorns) found in Britain, the breed is declining globally. Pure American strains are a conservation priority in the US. These strains will perform well for grass-based dairying, as they are forage efficient.