Temperament:
Docile cows, but bulls should be handled carefully

The Guernsey cattle breed originated in the Channel Islands between France and England and was named for the Isle of Guernsey, which is the westernmost of the group. (The Jersey breed was developed on the neighboring island of Jersey, and the two breeds are related.) Cattle were first brought to Guernsey from Brittany over 1,000 years ago. Subsequent imports brought cattle from Normandy and this founding population was variable in size and in color, including white, red, black, brindle, and fawn. Over the next several centuries, cattle on the island were selected for the richness and quantity of their milk, and performance was gradually improved. Channel Islands cattle were exported to England beginning in the 1700s where they were widely used in the establishment and improvement of other breeds. 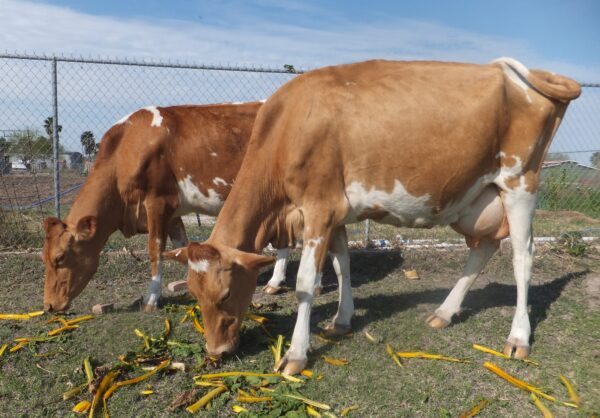 There was extensive trade between the Channel Islands and England, France, and the Netherlands, and cattle were part of this trade until the early 1800s. At that time, imports into Guernsey were stopped and the island herds were closed. Since then, the export of breeding stock from the islands has been a major agricultural enterprise. The closing of the island herds encouraged the standardization of the islands’ breeds. Cattle shows, which began in 1828 on Guernsey, hastened the process. Guernsey breeders selected their cattle for consistency of color, ranging from fawn to golden, with white spotting and golden skin.

Guernsey cattle were first imported to North America in the 1830s, with importations peaking in the late 1800s and early 1900s. The Guernsey Cattle Club was formed in 1877. The breed became a significant genetic foundation for the American dairy industry, contributing to the general mix of dairy cattle, as well as being used as a purebred.

Today, Guernseys are medium to large, with cows weighing 1,400 lbs. and bulls 2,000 lbs. The breed is usually horned, though polled strains have been developed. The breed is not known to have undesirable recessives. Cows are noted for their quiet dispositions, although bulls should be handled with care. They are good mothers and protective of their young. They generally have no birthing problems and are fertile. They are a sociable breed and sometimes cows will “watch over” another cow’s calf like a babysitter to allow the mother some respite.

A distinctive characteristic of the breed is the golden color of its milk, which results from exceptionally high levels of carotene, a precursor to Vitamin A. It is thought that the Guernsey excels in its ability to absorb this nutrient and transfer it to butterfat. Guernsey milk has been promoted under the trademark “Golden Guernsey.” Butter made from the milk is distinctively golden. The milk is also naturally high in A2 Beta Casein.

Guernseys have had a prominent place in American agriculture, but the breed has fallen into decline in recent decades. With the dairy industry focused exclusively on the quantity of milk produced under confinement conditions, and pricing favoring the quantity of fluid milk over the quality of the components, such as protein and butterfat, the Guernsey’s strengths lost market value. Between 1970 and 1990, annual registrations of purebred calves dropped by 60%. Some breeders have sought to stop this decline by increasing milk production, often through the introduction of Red Holstein. This strategy hasn’t been successful at increasing production enough to make the Guernsey competitive with the Holstein, and instead, it has caused the breed to lose some of its genetic distinctiveness.

The Guernsey is strong numerically, especially in Britain, but the breed has an uncertain future. It’s not clear if the Guernsey can take advantage of the movement to grass-based dairying, like Jerseys, nor is it known if changes in component pricing may return some of the market value to its milk. Traditionally the breed is a good grazer, able to produce on quality pastures, hardy, adaptable to a variety of climates and conditions, and easy to manage. These abilities will be called upon if the Guernsey is to regain its historic place as a leading dairy breed.

They make a good family cow because they are a medium size and easy to milk. Drew Conroy, in his book Oxen: A Teamster’s Guide, rates the breed highly as a first breed for novice drovers.

Notes:
Good grazer, adaptable to variety of climates and conditions