The Giant Chinchilla is an American rabbit breed developed in 1921 by Edward H. Stahl of Holmes Park, Missouri. Stahl was one of the first people to own a sensational new rabbit breed known as the Chinchilla, which has been created in 1913 in France. Once the breed hit American shores in 1919, Stahl knew that it would take the American fur industry by storm but would be hampered by the breed’s small size.

While other breeders began to breed up the weights to what would become known as the American Chinchilla, Stahl set his sights on breeding a “Giant Chinchilla.” In the basement of his home, he began experimental breeding using a larger-sized, pure Chinchilla buck with perfect color to New Zealand Whites, along with several other large breeds. Offspring from the cross with the White Flemish and the American Blue had reasonably good coloration with progress toward a larger size and were used for continued selection. On Christmas morning, 1921, a Giant Chinchilla doe was born that he considered his ideal. He named her the “Million Dollar Princess.” 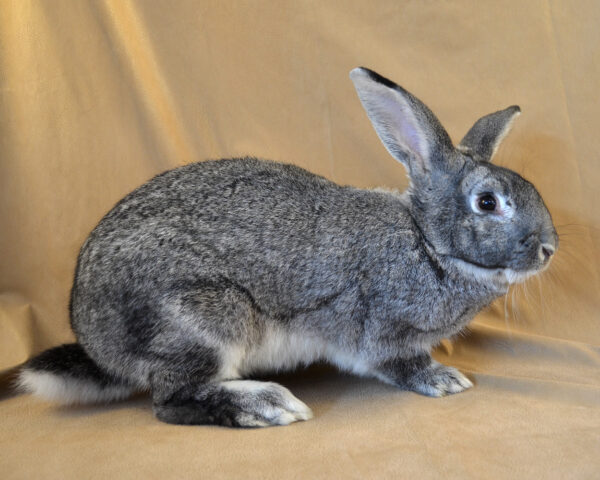 A proposed working standard was presented for the American Chinchilla Giant in 1924, but was withdrawn in favor of the American Chinchilla (Heavyweight Chinchilla). At the demand of breeders of these giants, the standard was again proposed in February 1928 and was eventually accepted for the Giant Chinchilla. It should be noted that Edward H. Stahl is the first and only individual to ever make a million dollars from the sale of rabbit breeding stock and is considered the “Father of the Domestic Rabbit Industry in America.”

Giant Chinchillas are large with mature bucks weighing between 12 to 15 pounds and does 13 to 16 pounds. Meat-producing qualities are given top consideration on the judging table. Because of their large size, hutches with all wooden floors and heavy beddings with shavings and straw are required. The breed is gentle in nature. Does have large litters and are very good mothers. Youngsters grow very fast and it’s easy to produce a 7-pound fryer in just 2 months.