The first Chinchillas were created by a French engineer M.J. Dybowski and were shown for the first time in April 1913 at Saint-Maur, France. The new breed took the rabbit world by storm as the ideal fur rabbit, which so greatly resembled the South American Chinchilla lanigera. A Mrs. Haidee Lacy-Hulbert of Mitcham Surrey, imported the first of the breed to England in the summer of 1917. A British exhibitor presented a shipment at the New York State Fair in 1919. After the show, he sold all the stock to Edward H. Stahl and Jack Harris. The original Chinchillas were rather small at 5 to 7 1/2 pounds, and American breeders set out to produce a larger animal that would be better suited for meat and pelts. Through selective breeding for larger size, fine bones, and a good dress-out percentage, a breed standard was issued for the Heavyweight Chinchilla. It was a larger form of the Standard Chinchilla – the same shape, color, and general make up. In 1924, both Chinchilla breeds were adopted into the standards book and shortly thereafter, the Heavyweight Chinchilla was renamed the American Chinchilla. 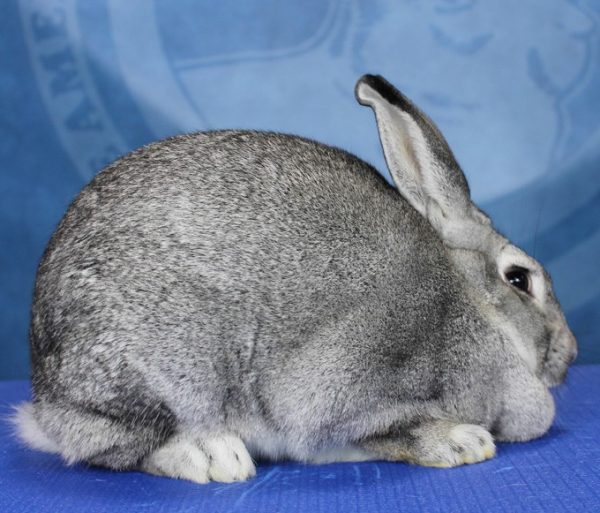 There is no single person that can be credited with the development of the American Chinchilla, though the breed can be credited with making a large impact with rabbit keepers and other rabbit breeds. Between November 1928 and November 1929, no less than 17,328 Chinchillas were registered through the American Rabbit & Cavy Breeders Association (American Rabbit Breeders Association, Inc.) – a record that has yet to be broken. The Chinchilla rabbit has contributed to the development of more breeds and varieties of rabbit worldwide than any other breed of domestic rabbit. Sports from the Chinchilla have created the Silver Martens and American Sables in the United States, and the Siamese Sable and Sallander breeds abroad.

The American Chinchilla is the most rare of the Chinchilla breeds. Its small population is largely due to the demise of the rabbit fur industry of the late 1940’s. Despite the breed’s fine meat producing qualities, producers of today prefer an all white rabbit for the meat market. The American Chinchilla is a large, hardy and gentle animal, with mature bucks weighing in at 9 to 11 pounds and does at 10 to 12 pounds. They produce large litters, have good mothering instincts, and fryers reach market weight quickly.

At first glance the American Chinchilla is salt and peppered colored, but once the fur is blown into, four distinct bands of color will appear.