Galloway cattle originated in the rugged hill country of southwestern Scotland. The native cattle of this region were consistently hardy and thrifty, though they varied in color, horn type, and conformation. During the late 1700s and early 1800s, the Galloway breed was developed through selection for standardized, polled beef cattle that retained environmental adaptation. The Galloway then became a valuable part of trading between Scotland and England. 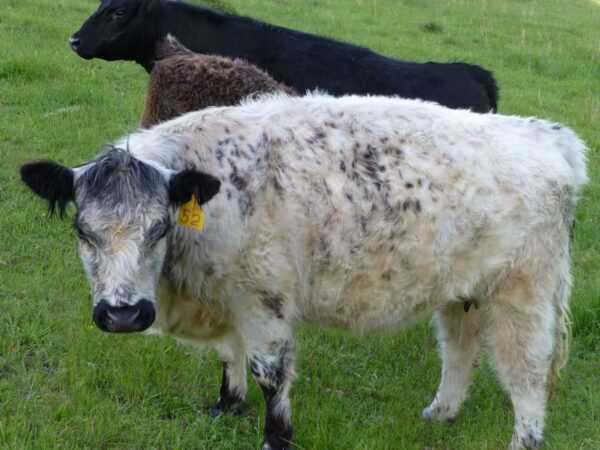 The Galloway is related to the Aberdeen Angus, a breed developed in northeastern Scotland about the same time as the Halloway. A herdbook for the two black, polled beef breeds was established in 1862, with a separate Galloway herdbook opening in 1877. Since then, the breeds have diverged, with the Angus selected for rapid growth on better feed, and the Galloway for its ability to thrive on poor forage in a cold, wet climate.

Galloway cattle were imported to the United States in the 1850s and the American Galloway Breeders Association was founded in 1882. The Galloway’s success initially rivaled the Angus, though, by 1900, it was found in a smaller niche as a range breed on The Great Plains.

Galloway cattle are polled and medium in size. Cows weigh about 1,200 pounds and bulls 1,800 to 2,000 pounds. The long body conformation increases the production of high-priced cuts of meat. Galloway beef is of great quality and can be marketed in a variety of specialty niches, such as grass-fed and organic beef. The cattle grow a long, thick coat in the winter as part of their adaptation to the cold. Galloway hides were substitutes for buffalo robes in the early 1900s, and they can also be made into rugs.

Black is the most common color in the breed, with red and dun also found. White Galloways occur more rarely. They are white with black or red points, including ears, eye rings, nose, feet, and teats. Within herds of white Galloways, it’s not unusual to find roan and speckled animals as well. Belted Galloways, who are known for their black bodies with white belts, also originated within the Galloway breed. However, they are generally registered with a separate association. Some belted animals continue to be registered in the Galloway herdbook, and the color is recognized as part of the Galloway breed.

The Galloway is rare in North America, but it’s increasing in numbers globally with an estimated population of about 10,000. In Europe, the breed is considered a “light grazer,” meaning that its relatively light bodyweight makes it preferred for grazing where heavier animals would damage marginal lands. Galloways are also known for their browsing ability, giving them added value in the management and diversification of grasslands.

In North America, the Galloway stands out for its forage efficiency, hardiness, maternal qualities, and excellence of beef. The breed’s history as a pure breed means that Galloway cattle are genetically consistent and impart outstanding vigor to crossbred offspring. Black offspring have the advantage of receiving the same premium price given to Angus cattle as part of the Certified Angus Beef program. Recent market changes favoring efficient production and high-quality beef may lead to a revival of interest in the Galloway, a breed that is far too useful to remain rare.