Notes:
Temperament variable by herd, beef production on poor range, some are dwarf

The Florida Cracker is one of the oldest breeds of cattle in the United States, descending from Spanish cattle brought to the Americas in the early 1500s. As the Spanish colonized Florida and other parts of the continent, they established low input, extensive cattle-ranging systems typical of Spanish ranching. The Florida Cracker and other breeds which developed under these conditions are called ­criollo cattle, which means, “of European origin but born in the New World.” 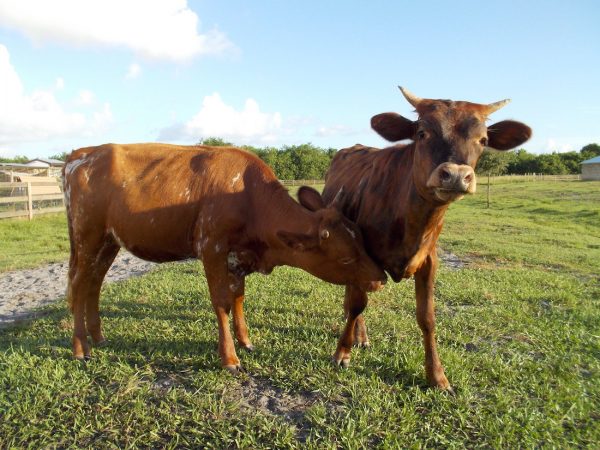 Florida Crackers were shaped ­primarily by natural selection in an environment generally hostile to cattle. This resulted in a heat-tolerant breed that’s long-lived, resistant to parasites and diseases, and productive on the low-quality forage found on the grasslands and in swamps of the Deep South. It was not until the importation of India’s Zebus cattle and the development of the American Brahman in the 1900s that the Florida Cracker had competition from other heat-tolerant cattle. Not long ­afterwards, the development of parasiticides and other medications allowed British and European breeds to survive in the Deep South, thus making the Florida cattle industry more diversified. This influx of new breeds nearly caused the extinction of the Florida Cracker.

By the mid-1900s, the majority of purebred cows had been crossbred, first to Brahmas and then to British and European breeds. The Cracker cow provided the maternal ability and hardiness necessary for crossbreeding programs to succeed and the genetic distance between the Florida Cracker and other breeds created exceptional hybrid vigor in the offspring. The credit for success, however, was always given to the improved breeds, and the Florida Cracker was largely abandoned. It was only through the efforts of a few Florida families, stubbornly resistant to “progress,” that the breed survived in its pure form.

As one would expect of cattle adapted to the heat, Florida Cracker cattle are small. Cows weigh 600 to 800 pounds and bulls 800 to 1,200 pounds. They exhibit the angular conformation typical of Spanish cattle adapted to harsh conditions. Horn style and shape vary, including very long and twisted horns as well as smaller, more crumpled shapes. Polled cattle are also found. Dwarf types of Florida Crackers, called “Guineas,” occurred historically and were well regarded as milk producers.

Colors in the breed vary widely, including almost all of the colors known in cattle. This is a legacy from the breed’s ancestors in the South of Spain, where even today ranchers prefer multicolored herds. In Florida, breeders also selected for a variety of colors and patterns as a way to aid recognition of their cattle on range. Generally, solid red, dun, black, and brindle colors predominated in south Florida herds, while in the north, herds were more likely to contain spotted and roan ­animals, some with distinctive color sided and linebacked patterns.

Notes:
Temperament variable by herd, beef production on poor range, some are dwarf