Use:
Dairy; some Draft

Country of Origin:
The Netherlands

Dutch Belted cattle are a dairy breed named for their country of origin and striking color pattern: black with a bright white “belt.” In the Netherlands, it is also known as the Lakenvelder. (The term ‘laken’ means a sheet or blanket around the body.)

The Dutch Belted has been known in the Netherlands as a standardized breed since the 1600s. From early records, it appears that they were developed by nobility who wanted various species with the same color pattern – white in the middle and black on both ends. They eventually produced belted breeds of cattle, rabbits, goats, poultry, and swine. Dutch Belted cattle were also selected as a specialized dairy cow able to convert lush pastures (with little grain supplementation) into 12,000 to 15,000 pounds of rich milk per lactation period. 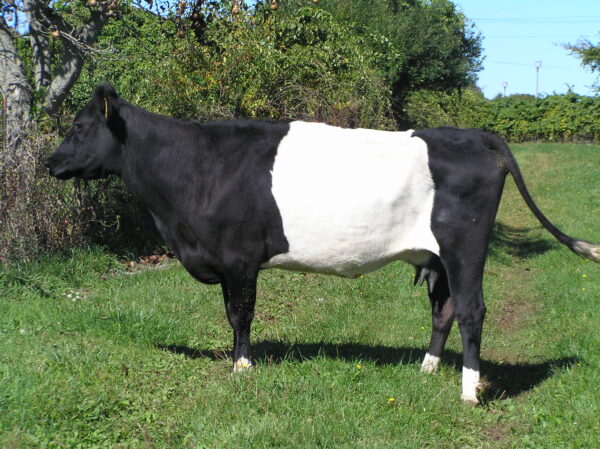 Dutch Belted cattle were first imported into the United States by the US Consul of Holland, D.H. Haight of Goshen, New York, in 1838; he later made two more breed importations. In 1840, the famous showman P.T. Barnum imported these flashy cattle for use in his circus shows, exhibiting them as “rare and aristocratic”. “They struck my fancy in Holland,” he said. “I imported a few and then found their unique and novel appearance not their only quality, for they proved wonderful milkers – far superior to any other cattle to which my attention has been drawn.” Barnum soon moved the exhibition herd to his farm in Orange County, New York. Following Barnum’s importation, H.W. Coleman imported a small herd in 1848 to his estate in Pennsylvania. Another notable importation was made by W.H. Lance of Peapack, New Jersey, in 1906 – including a fine cow named “Peapack Dutchess” No. 1390. It was from these early importations that the Dutch Belted breed was established in the US.

The Dutch Belted Cattle Association of America (DBCAA) was formed on February 4, 1886, in New York. N.W. Howell was elected President, and H.R. Richards of Easton, Pennsylvania, was the first secretary of the organization – subsequently serving for 25 years in that capacity. Their first herdbook recorded a total of 31 herds. (This is the oldest open herd book for belted cattle in the world as the original Dutch herdbook has not been continuous; their most recent herdbook was begun in 1979 after a nearly 50-year lapse.)

For centuries, the Lakenvelder was bred and kept by the Dutch who were not prone to sell their prized cattle. Never a widely popular breed, the Dutch Belted suffered a large decrease in their European population due to and after World War II. By 1950, only 4-5 herds were known to exist in the Netherlands, and in the 1970s, semen from American bulls was imported to revive the breed in its native home.

By the 1970s, the Dutch Belted was nearing global extinction. The DBCAA lapsed into inactivity and only a few purebred breeders remained. Unfortunately, many Dutch Belted cattle were lost during the US Department of Agriculture’s dairy buy-out program of the 1980s, when thousands of dairy cattle were sold for beef to reduce the number of dairy herds to help raise milk prices. It was only through the action of a handful of breeders, primarily Kenneth and Winifred Hoffman of Earlville, Illinois, that the Dutch Belted breed survived in the US. Their work also had a global impact because semen from the Hoffmans’ bulls has been used in the Netherlands.

The Livestock Conservancy began management of the DBCAA’s registry in 1993. The Conservancy facilitated the Association’s reorganization, providing the structure and representation necessary for the breed to survive. The DBCAA registry established grade-up and recovery programs to increase numbers in the breed. A renewed interest in Dutch Belted cattle began in the 1990s, mainly among farmers interested in grass-based dairying. As of 2007, the Dutch Belted was in a stronger position than it had been in several decades. In 2013, the Dutch Belted Cattle Association took over their own registry and management of the association.

Dutch Belted cattle are black, or occasionally red, with a white belt. According to the DBCAA, the belt should begin just behind the shoulder, and extend almost to the hip and go entirely around the body. Bulls range up to 2,000 lbs. and cows from 900 to 1,500 lbs. They have long horns that curve slightly upward at the points. The heads of Dutch Belted cattle are broad, but comparatively long and somewhat dished. Their bodies reflect the classic triple-wedge shape of dairy cattle, with a straight top line, deep middle, long wide rump, and good spring of rib. Their moderate frame size gives a high dairy-beef yield.

They consistently demonstrate reproductive efficiency and longevity of production; cows are known to produce calves well into their teens reducing replacement costs. Dutch Belted bulls provide hybrid vigor when crossed with other cattle breeds; pure bred offspring are uniform and predictable. Their milk is easily digested, and with 3.5-5.5 butterfat and exceptionally small fat globules, it is an ideal drinking milk.

The Dutch Belted is an intelligent and friendly breed making it a good choice for beginners and family farms where ease of handling is valued. The number of cattle in the US and Holland has been increasing but the breed is still considered extremely rare and in need of new stewards.

Country of Origin:
The Netherlands