Temperament:
Gentle with people; Assertive with other chickens but not bullies

Characteristics:
Fast growth; can be eaten at any age

The Delaware chicken breed, originally called the “Indian River” chicken came about as a result of “sports” in a breed improvement program in the 1940s. George Ellis of Indian River, Delaware was breeding Barred Plymouth Rock roosters to New Hampshire hens to develop a chicken that was a good layer and also quick maturing to be used for broiling chickens.

A few off-colored sports were produced that were white with black barring on the hackles, primary and secondary feathers, and tail. This coloration is similar to the Colombian color pattern, but with barring in place of the black sections. Mr. Ellis became interested in these birds and worked hard to improve and refine them, and so created what eventually became known as the Delaware chicken. 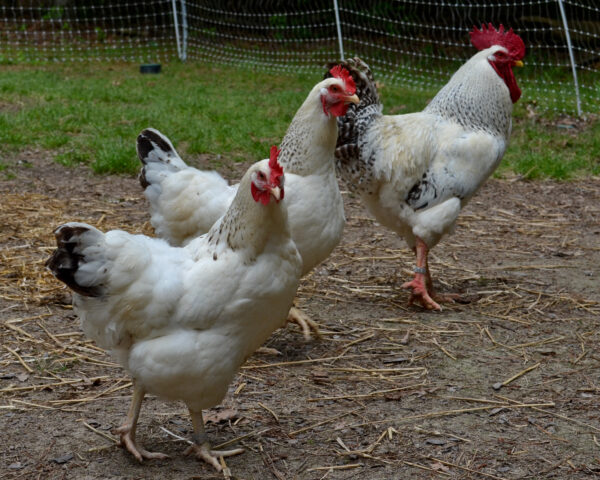 For about twenty years, the Delaware and the Delaware/New Hampshire crosses were the most popular broiler chickens on the Delmarva Peninsula because of the breed’s ability to produce offspring with predominately white feathering. This is an advantage for carcass appearance because white feathers don’t leave dark spots on the skin when they grow in. Delaware and the Delaware/New Hampshire crosses were replaced in the late 1950s by the Cornish/Plymouth Rock crosses (solid white) that now dominate the broiler industry. Because the Delaware was bred specifically for the broiler industry they were not well known on many small farms or homestead, so their decline in popularity was quick. Although the breed is very rare, it is being rediscovered by today’s young farmers with whom it is becoming more popular.

Although its economic dominance was short-lived, the Delaware still makes an excellent dual-purpose bird for today’s small farms. They are low maintenance, requiring just food, water and shelter, and they are a healthy breed.

The breed is noted for its rapid growth and fast feathering. They are medium-sized with a deep and broad body that gives a robust appearance. From the side, the body is shaped like an inverted triangle with a “U” indentation in the back. The keel is also long, extending well to the front at the breast and rear of the legs. They have moderately large single combs with five points, and a medium-sized head and neck. Their comb, wattles, and ear lobes are red, their eyes are reddish-bay, and their beak is reddish horn or yellow. The legs are well set apart and are large and muscular, and shanks and toes are yellow. Males grow up to 8 lbs. and females 6 lbs.

Hens lay about 4 large to jumbo, light brown eggs a week – up to 200 a year. This is not generally a broody breed, so you would need to use a hen from a broody breed or an incubator to hatch eggs.

They are curious and like to explore, and although they are white, they are predator-savvy. They are calm and friendly and like to chatter and follow their people around, though generally aren’t considered a “cuddly” breed. They are assertive, but not bullies. They can be loud, so may not be a good choice if you have close neighbors who aren’t interested in chickens. They don’t mind being confined if they have something to do as they really prefer being out and about, exploring. They do not fly, so a four-foot fence would keep them enclosed.

Characteristics:
Fast growth, can be eaten at any age