The Crèvecoeur chicken is one of the oldest standard-bred breeds in France. Their name translates to “broken heart” and derives from the small town of Crève-Coeur en Ange in Normandy. Little is known about the breed’s origins other than they were developed in Normandy and have been documented back to the 12th century. The Crèvecoeur capon was a very popular meat bird of the upper-middle class French. In 1889, there were two sets of awards offered at the first agricultural exhibit held in Paris: one for Crèvecoeur chickens and another for all other chicken breeds. Although the breed was popular in France, it didn’t gain much interest in other countries.

The Crèvecoeur is the oldest known French chicken breed in England. 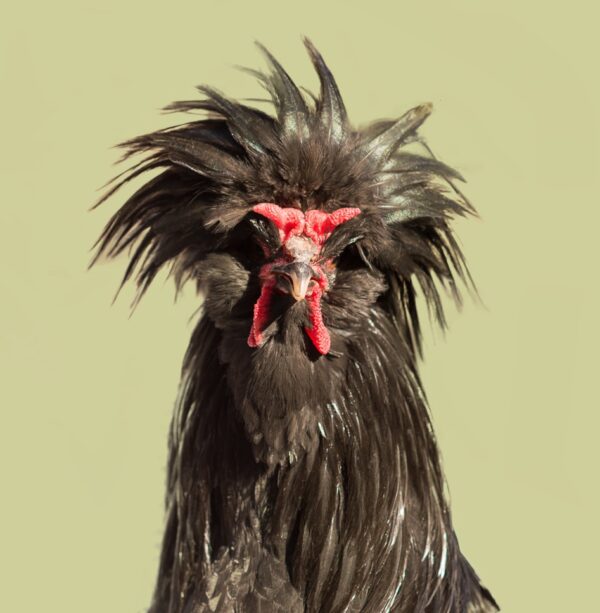 The breed was imported to America in 1852 and 1867, and again in the 1870s, but at the time was regarded as “too tender” for the climate of eastern and middle states there.

The Crèvecoeur remained popular in France until the early 20th century. During World War II, the German army reached Normandy and within two years, nearly all of the birds (other than the ones that had been hidden away by farmers) had been eaten. This left the bird as critically endangered until recently when efforts have begun in the U.S., France, and Australia to begin rebuilding flocks.

The Crèvecoeur chicken black variety was recognized by the American Poultry Association Standard of Perfection in 1874.

This breed is a good choice if you are looking for a producer of outstanding meat, moderate egg production….and an interesting pet.

Solid black in color, Crèvecoeur chickens have moderately sized crests and beards, compact, well-proportioned bodies, and short legs. Their body is Dorking-like. Their heads are adorned with a distinctive “v” comb (although “leaf” or “stag” combs have been seen). Shanks and toes are black or dark leaden-blue, reddish-bay eyes, black beak that shades to horn at the tip. They have small wattles and small earlobes. Males weigh 8 lbs. and females weigh 6.5 lbs.

The breed was developed primarily for the quality of its flesh. Crèvecoeur chickens have small, fine bones, and the proportion of meat to offal can be quite high. Their skin is white and the meat is regarded as fine and short, and is very white in the breasts, although the leg meat can be quite dark and almost duck-like in color. They also fatten readily and were a French favorite to “gaver” or stuff – a traditional practice of making birds eat more by inserting a tube into their mouths that introduces a specially blended wet mash to supplement their normal diet.

Hens lay 120-150 white to tinted, medium to large eggs a year. They can continue to lay for many years. They are moderately broody.

In movement, they’re quiet, deliberate. They generally have gentle temperaments, and aggressive birds should be culled. They do not do well in mixed flocks because of their crests, and they can be picked on by other breeds. Their temperament makes them a good pet, especially if they are handled from birth.

The breed withstands confinement remarkably well, appearing quite content; in fact, they are best suited to small areas, and are easily reared on moderately dry soil. Because of their crests, Crèvecoeur chickens are usually kept in covered pens. They are adaptable to most climates, but care must be taken in the winter to prevent their crests and beards from getting wet and freezing.

They may have sensitive digestive systems than other breeds, so you may need to use a probiotic during weather extremes and times of stress. Although this breed was once considered “delicate” in constitution, modern birds are more robust.

This is a sweet, friendly bird and with its unusual conformation, it is a good choice for a fancier who wants to raise a unique breed that is internationally endangered.