Please note: Study breeds require further research to learn whether their history, genetic integrity, global status, and U.S. numbers merit listing on the Conservation Priority List. This step is necessary to clearly target The Livestock Conservancy’s conservation efforts toward breeds that not only require conservation but can also benefit from our conservation efforts. Breeds in this category are only listed online.

The following article is from the spring 2014 issue of The Livestock Conservancy News.

An Island for Cattle and Seabirds

Coastal islands often support both wildlife and feral livestock with rare genetics. This is the case in Alaska’s Aleutian Island chain. A number of the Aleutians are home to feral, semiferal, or managed populations of cattle, bison, horses, sheep, or reindeer, introduced within the last 200 years. The cattle on one Aleutian Island have come to the attention of the media. I speak of Chirikof Island, and the cattle that bear its name. You see, the cattle of Chirikof Island were originally introduced to feed workers for a fox farm on the island in the late 1800s. After a period of abandonment, the island was subsequently leased for ranching until the year 2000, when the lease was not renewed because of a change in jurisdiction. The island was no longer managed by the Bureau of Land Management, but by the US Fish and Wildlife Service (USFWS), which chose not to renew the final lease. There was a final failed attempt to remove the cattle in the early 2000s, but ever since, the cattle have remained and have reverted to feral. To understand what is happening on Chirikof it might be best to go to another set of islands off the California coast. 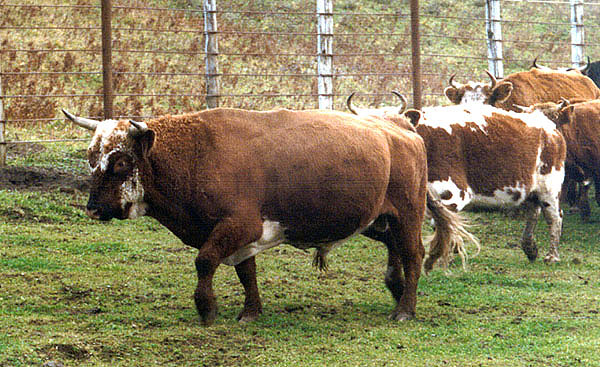 A few years back, I was lucky enough to make it out on a field trip put together by Santa Barbara Botanical Garden to Santa Barbara Island, one of the smallest Channel Islands off the coast of Southern California. California’s Channel Islands have a history of agriculture, including rare livestock breeds, and like the Aleutians, in the 20th century these livestock came into conflict with rare and endangered native plants and animals. At the time of my visit to Santa Barbara Island, the native vegetation had been severely impacted by past farming and livestock rearing and water had to be hauled by boat for the animals. Native plants were coming back, but non-native annual grasses transported to the island during its agricultural era were thriving. So too was a species of invasive iceplant transplanted to the island by seabirds from the mainland.

Removing feral livestock from islands is an action which is being repeated around the world. Many islands were populated with livestock during the days of exploration and settlement, where they were often left unmanaged. Left to fend for themselves, these populations are subject to unique selective forces and genetic drift. Many descend from breeds that are today lost or uncommon.

Unfortunately, the pattern has also been that when a large herbivore is introduced to an island without predators, its population exceeds its carrying capacity and overgrazing is the natural consequence. Many island plants are poorly adapted to grazing and will go into decline if grazed. This is particularly an acute problem in biodiversity hotspots like California and the tropics. Isolated islands in these regions may not only hold high diversity but may also harbor native plant and animal populations found nowhere else in the world. Even after removing introduced livestock, it is difficult for these native animals or plants to come back. By the same token, having evolved to live by the island’s specific set of environmental and climatic rules, native island plants and animals often tend to be unique. Therefore, islands represent a tremendous opportunity for ecological restoration, and many islands around the world have restoration programs.

In California, a choice was made to rescue some of the rare domestic breeds for conservation on the mainland (see the accompanying article on Santa Cruz Island sheep), and also to rehabilitate the islands to protect their native flora and fauna, much of which can be found nowhere else on earth. This ensured the future for both the livestock and the wildlife and was possible only through collaboration between organizations such as The Nature Conservancy, The Livestock Conservancy, and university researchers.

On Chirikof Island, during the last effort to remove cattle, some genetic samples were taken. It seems the cattle of Chirikof Island are special, very special. A 2007 scientific paper by scientists at the US Department of Agriculture National Animal Germplasm Repository confirmed that they had a relatively small degree of genetic relatedness to other breeds of beef cattle. The Chirikof cattle were more like the cattle of Russia, the country which originally colonized and then sold Alaska to the United States. They determined this by comparing the Chirikof cattle DNA to that of rare Russian Yakut cattle, which showed a closer relationship than any other breed they had tested. Some of the cattle introduced to Chirikof Island must have descended from the animals of the early Russian settlers and missionaries of coastal Alaska. Not only did these Russian genetics make it to the island (and probably other Aleutian Islands as well), but they thrived there. Animals with Russian genes out-survived all other cattle introductions, which continued even into the 1980s. Though Chirikof Island cattle can be variable in appearance and even have a variety of coat patterns, they form a genetically discrete group or breed, with less within-breed variation than many other breeds. The Chirikof cattle are well known for cold tolerance and can live on grass year round. They are the result of natural selection for thriving on grass in a hostile climate.

The genetically unique nature of Chirikof cattle and their adaptations to cold and grass-only diets make them perhaps ideally suited to serve the need for hardy, cold-adapted, range-fed cattle. Producers in Alaska, Canada, and many Western states might benefit from such a hardy breed for grassfed beef. Some might find value in using Chirikof bulls in a crossbreeding program, while conserving their unique traits by maintaining a purebred herd to replenish their breeding stock. Grassfed beef has proven health benefits to consumers, and cattle genetics that perform well on grass are in demand. Chirikof cattle could potentially have a bright future in the beef industry. Research on the genetics of Chirikof Island cattle may unlock clues to cold tolerance and other fitness traits in cattle.

Chirikof Island and many of the Aleutian Islands are managed by the USFWS as part of the Maritime Wildlife Refuge. The USFWS does not have it as part of its mission to maintain feral cattle. They are charged with protecting archeological sites, native seabird breeding grounds, and native vegetation. An unmanaged cattle population, with no controls on herd size, grazing, or wetland access, will tend to trample stream banks, eat certain plants preferentially, and cause increases in bare ground. More bare ground could cause accelerated erosion rates and damage to archeological sites. All of this is damage the USFWS believes may be in progress on Chirikof Island and other islands in the Refuge. The USFWS recently held a public comment period, seeking input on how to approach the problem. The Livestock Conservancy, USDA’s National Animal Germplasm Laboratory, locals, and concerned individuals such as myself have responded.

Local folks in Alaska would like the cattle left on the island. Some see having a healthy population of cattle on a remote island as an insurance policy against potential devastating livestock diseases. Like many of us, they see cattle as food, as a resource for their subsistence. At least one local rancher has claimed an ownership interest in the herd. Locals would also like the opportunity to save and eat the meat of any animals slaughtered in the name of restoration.

My favorite solution to this conundrum is a return to livestock management. A new lease or partnership of some kind would allow cattle management to return to the island. The cattle could be fenced out of sensitive portions of the island to allow streams, wetlands, and archeological sites to heal. Fencing might also allow portions of the island to be used for nesting habitat by seabirds, either through rotational grazing or permanent cattle exclosures. Perhaps the cattle wranglers could participate in eradication of introduced foxes and rodents. Eradicating nonnative foxes and rodents would enhance the restoration goals of the USFWS while allowing the rare cattle to remain in the environment where they have been allowed to evolve for the last hundred years.

Although a solution which allows the cattle to stay on the island might not be within the scope of the USFWS’s current mission for Chirikof, it is not without precedent. The Wichita Mountain National Wildlife Refuge in Oklahoma has played a central role in the preservation of the historic Texas Longhorn breed. The Wichita Mountain effort was likely the first federal attempt at rare breed conservation on the planet. Begun in 1927, it saved the Texas Longhorn from extinction. A similar mission could be appropriate for Chirikof Island, as the Chirikof Island cattle are a historically important remnant of the original cattle brought to Russian America by early settlers. Any such opportunity would also have to weigh the conservation of wildlife, native culture, and practical aspects of tourism to this remote island, and protecting and preserving both the Chirikof cattle breed and wildlife may not ultimately prove practicable.

The alternative option to ongoing management would undoubtedly mean the removal of Chirikof Island’s cattle from their historic home. The worst-case scenario would be eradication without salvage, as happened not so long ago on a nearby island. In the 1980s, the USFWS determined that they should remove cattle from the Shumagin Islands. Most attempts to physically remove cattle from the island failed, so most animals were simply shot and left to rot. Ten animals were moved to Unga Island and under ownership by a native group, and now number 30-100 head.

Better options than simple slaughter may be available for Chirikof. A mobile abattoir is used for processing grass fed beef for a cattle ranching operation on nearby Sitkinak Island. The USDA Livestock Germplasm Repository and the Livestock Conservancy are interested in helping to salvage germplasm as well as live animals. Realistically, even for such a rescue mission to procure beef to feed people and germplasm to rescue the breed, substantial funding must be obtained.