The story of the Checkered Giant begins in Europe, where large spotted rabbits were known since the mid-1800s. These rabbits became popular in Germany and were used in some crossbreeding efforts, including the Flemish Giant rabbit to improve size and type. Otto Reinhardt took these rabbits in a new direction and, in 1904, began introducing them to Black Flemish Giants, although some say they were Gray Flemish, to produce rabbits that became the Checkered Giant.

Others joined his efforts and the breed eventually became popular in Europe and then made its way to the United States by 1910. By then the required color pattern for spots was set in a standard for the breed and included the distinctive “butterfly” shaped marking whose wings circle the nose and body extending toward the forehead of these rabbits. In a nod to this marking, they became known as the Giant Papillon in Europe.

Today, exacting color patterning on the body is paramount to breeding and can be a challenge to perfect. These include a dorsal line along the top of the back, solid color ears, specific patterns of spots on the sides of the body, eye circles, and cheek spots all laid out exactingly in the American Rabbit Breeders Association’s Standard of Perfection. In 2019, they celebrated 100 years in the ARBA standard and were celebrated as the fancy’s “The Rabbit Beautiful.” 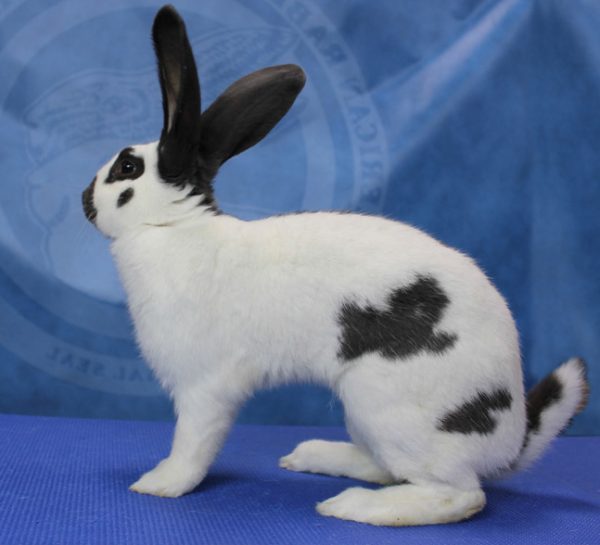 As the name implies, the Checkered Giant is a large rabbit reaching weights of up to 12 pounds or more. Despite their size, they manage to carry their slightly arched bodies higher off the ground than other large breeds with the standard stating that there should be “plenty of daylight underneath.” They’re considered a “running breed” needing a large cage or enclosure so they have room to move and be comfortable. The Checkered Giant is recognized in two colors: black and blue.