Poultry keeping has been practiced in Belgium for a long time; in fact, the Flemish carry the nickname “the chicken eaters.” Two Flemish chicken breeds, Braekel and Campine, are nearly identical and have a common history and ancestry.

The larger Braekel is native to the rich clay soil of the Flanders district; the Campine is from the less fertile district of Kempen, is smaller, and males are hen-feathered. The 16th century Italian naturalist, Aldrovandus, mentions that the ancestor of these two breeds descended from Turkish fowls. Julius Caesar is said to have taken Campine chickens home with him after he looted Belgium. 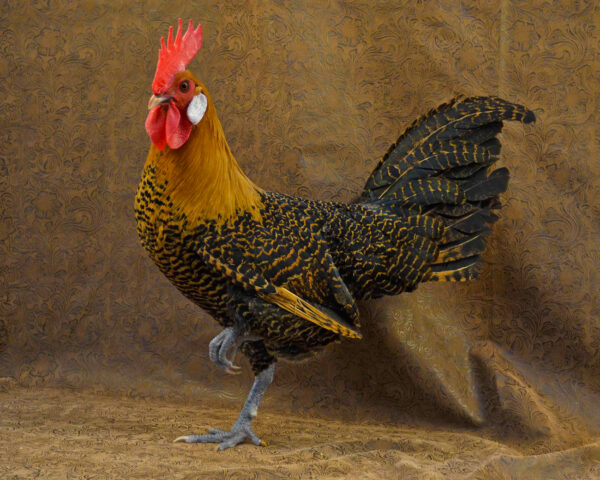 In 1885, Campine chickens found a following when they were imported into England. In 1893, Campine chickens were first imported into North America by Arthur D. Murphy of Maine. The breed wasn’t popular and was dropped from the American Poultry Association’s Standard in 1898. M.R. Jacobus of Ridgefield, New Jersey, again imported the breed from English breeders in 1907. But once again, Campine chickens proved to be unpopular because they weren’t “rugged enough.” The Homestead Campine Farm of Wayland, MA specialized in Campines and succeeded in improving their hardiness, but other breeds had already become preferred as egg-layers.

The breed started out as a farmyard fowl but came to play a major role commercially as the Flemish developed and perfected what was the forerunner of today’s commercial production system. The first part of this role was to provide rapid feathering and growth in a cross with the Malines chicken to produce meat. The second role was as an autosexing breed for egg production.

Both varieties of Campine chickens were recognized in the American Poultry Association Standard of Perfection in 1914.

Campine chickens are a non-broody fowl that lays 140-200 white, medium size eggs that are large for the size of the bird. They have a large single red comb that can flop to one side, and close-fitting feathers. Their legs are dark blue, face and wattles are red, and they have white earlobes. They have white skin. Males weigh 6 lbs. and females weigh 4 lbs.

Campines come in two varieties: Silver and Golden. When Silver Campine females are mated to Golden Campine males, chicks can be sexed as day-olds. Female chicks will have a reddish blush color while males have gray on the top of their heads.

They are flighty and inquisitive breed and are one of the rarer chicken breeds. They prefer to forage and free-range most of the time. This is a good breed for beginners. They have been described as clowns and entertaining, and though they are a friendly breed, they do not care to be handled and are not a “cuddly” breed. They prefer warmer climates, and do not do well in extreme cold. This breed does well in a mixed flock of non-assertive breeds, though Campines are smaller and may be “picked on” by larger birds.