William Cook, a famous poultry breeder from Orpington, Kent, created several Orpington duck varieties, including the Blue, Buff, and Black. There were also Whites but they never became popular. The Buff variety came about by blending Cayuga, Runner, Aylesbury, and Rouen ducks to create a buff color that would allow him to cash in on England’s early 20th-century fad for buff-colored plumage.

Cook introduced his Buff Orpington to the United States in 1908 at the Madison Square Garden Show in New York City. In 1914, the breed was admitted into the American Poultry Association American Standard of Perfection under the name “Buff,” which is unusual since in no other instance is a color used as a breed name. (Holderread) 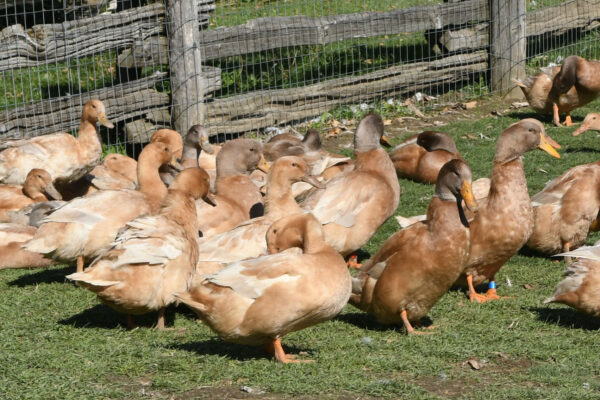 The Buff is a medium-weight duck ranging between 7-8 lbs. It is a long, broad bird with an oval head, medium-length bill, and long, gracefully curved neck. The Buff duck’s body carriage is twenty degrees above horizontal, its wings are short, and it has a small, well-curled tail. Both the duck and drake have buff plumage, orange-yellow shanks and feet, and brown eyes. The drake’s bill is yellow while the duck’s bill is brown-orange. (Malone et. al.) A Blue variety of the Orpington existed in the Americas but was possibly absorbed into the Blue Swedish breed. (Holderread)

The Buff has much to offer the breeder who is looking for an attractive, dual-purpose bird. They typically lay about 150-220 large white or tinted eggs per year, and gain weight relatively rapidly, making it ready for market within 8-10 weeks. (Batty) They can become broody, and some fanciers say that a broody duck will claim eggs from unattended nests for their own. They are reasonable sitters and can be devoted, protective mothers, but if your goal is to multiply birds, you may want to use an incubator.

Many consider the Buff a good meat bird that dresses out well because its light pin feathers don’t show on the plucked carcass. Despite this, Buff numbers languished when industry growers followed consumer interest in cheap meat and focused attention on the faster-growing Pekin even though many believe it is less tasty. (Holderread)

Buff Orpingtons are a friendly breed and make good pets. The are relatively quiet and startle less easily than some other duck breeds, but they will alert if they perceive danger. They like to forage, although like most duck breeds, they need to be protected from predation as they do not fly. Orpingtons do well in a variety of climates as long as they have appropriate housing and access to fresh water (a pond or even a child’s wading pool), especially so they can cool off when it becomes hot. They do well with other farm animals but may feel intimidated by dogs or other pets if they feel in danger. It is best to introduce other animals gradually when the ducks are young. Because they are rare, they may be harder to find that some other more common breeds.

Buff Orpington is a friendly, curious breed, and you might want to consider this rare, beautiful bird for a lovely and useful addition to your flock.

Read more about the Orpington from Jonathan M. Thompson in “The Orpington Ducks (A Cautionary Tale)” :

The history of the Orpington Ducks, as related by numerous authors up to the present time (Oct. 2008), has been the misconception that the Buff form of the Orpington Duck preceded the other colours of this breed, and that it was presented to the public at around the same time as, or even after, the introduction of Mrs Campbell’s khaki-coloured ducks in 1901… Download full article (.pdf)