Characteristics:
Excellent broilers; breast meat is almost dark like thighs; best ranger of the American class; exceedingly protective mothers; does well in the cold, but can adapt to the heat over time

Buckeyes were developed by Mrs. Nettie Metcalf of Warren, Ohio, and appropriately named after the “Buckeye State” and for their rich Buckeye color. Buckeyes are unique in the American Class of chickens as it is the only breed created entirely by a woman. Mrs. Metcalf started by breeding a Buff Cochin male to Barred Plymouth Rock females. This produced what she considered a large, lazy fowl. The next year she purchased a Black-Breasted Red Game male and crossed this male with the half-Cochin pullets. This cross produced several red offspring and from there she developed the breed. It is interesting to note that Buckeyes predated the introduction of Rhode Island Reds into the Midwest. 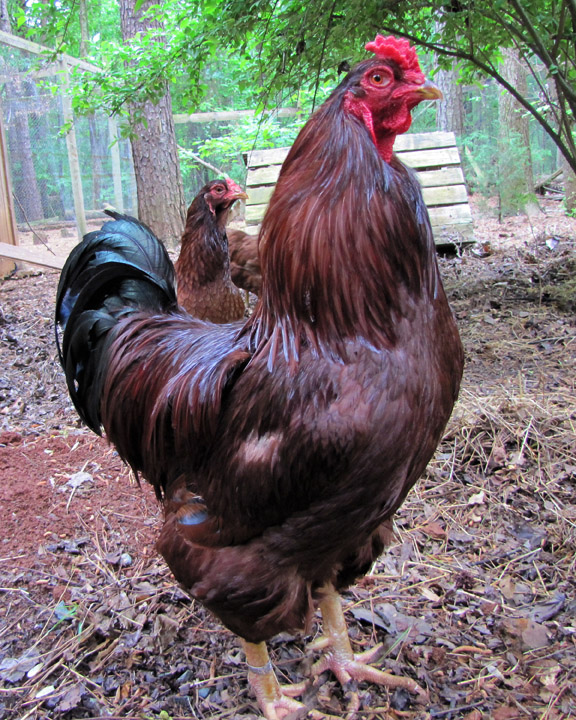 The breed was a popular homestead chicken because they are hardy, productive, good foragers, and inquisitive, but by the 1950s, poultry production began to be commercialized and the breed was not popular with commercial producers, so the breed went nearly extinct. However, thanks to some dedicated fanciers, Buckeyes were preserved and are again becoming popular.

The Buckeye should not be confused with the Rhode Island Red, even though they share some history. Buckeyes are unique in their body shape: slanted, short but broad back, very meaty thighs, powerful wings and breast. They appear very close to the 1905 Cornish breed in body shape. (However, the originator indicated that she did not use Cornish in their creating the breed; the Cornish body shape was simply her goal.) In color the Buckeye is also unique. The color of the Buckeye is darker than that of the original Rhode Island Red (later, the Rhode Island Red was bred for a shade of color even darker than the Buckeye). The Buckeye also has a slate colored bar in the under color (fluff) of its back; the Rhode Island Red’s feathers should be red to the skin. Both breeds share the trait of tight feathering, unique in the American Class of poultry.

The Buckeye is a dual-purpose breed of chicken. They have yellow legs and skin, and, thanks to their bright red pea comb, are very cold-weather hardy. They have a red face, wattles, and earlobes, reddish-bay eyes, and a yellow beak shaded with reddish horn. Roosters weigh approximately 9 lbs.; hens weigh approximately 6½ lbs., and lay medium-to-large sized, brown eggs.

The early Buckeyes typically produced 150-200 eggs per year, but current birds that have been selectively bred for laying ability may produce 175-240 eggs per year! Hens can go broody and are good mothers – good news for those wanting to raise and maintain a small flock.

While Buckeyes adapt readily to a variety of living conditions, they do best under free-range or conditions where they have room to move around. Because of their active nature, they do not do especially well in small confined spaces.

Buckeyes also have a personality all their own. They are a very active fowl and are noted for being especially vigilant in the pursuit of mice, some breeders comparing them to cats in this ability. They tend to have very little fear of humans and are possibly too friendly, although some males may show a little aggression during breeding season. They also seem to lack the tendency to feather-pick each other (this is a trait worthy of further exploration). The males emit a full range of sounds beyond those typical of many other chicken breeds, including a dinosaur-like roar!

Characteristics:
Excellent broilers; breast meat is almost dark like thighs; best ranger of the American class; exceedingly protective mothers; does well in the cold, but can adapt to the heat over time