The Black turkey originated in Europe as a direct descendant of the Mexican turkeys carried home with explorers in the 1500s. Black-colored turkeys became popular in Spain where they were known as “Black Spanish,” and in England, especially in the Norfolk region where they were known as “Norfolk Blacks.” After being selected for meat production for more than two centuries, the Black Spanish turkey made the voyage back to the Americas with early European colonists.

Once here, the variety was crossed with Eastern wild turkeys, which formed the basis for the Black turkey variety in America. This Black variety was commercially viable through the early part of the 20th century though not as popular as Bronze, White Holland, Narragansett, and Bourbon Red varieties. A 1937 Turkey World article states that Blacks were bred in large numbers along the East Coast including Maryland and Virginia. Their popularity enhanced by selection for a calm disposition, rapid growth, and early maturation. 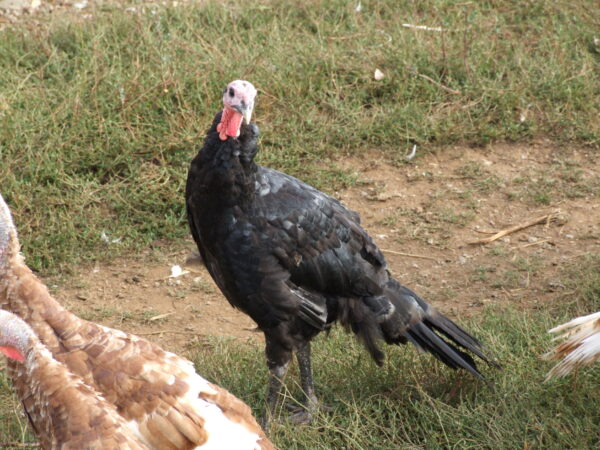 The Black was recognized by the American Poultry Association in 1874. Their plumage is a lustrous, metallic black with a greenish sheen on top and a dull black under-color. It’s undesirable to have a brownish or bronze cast or any white. Poults will often have white or bronze in their feathers but molt into mature plumage. The beak is black, the wattle is red, changeable to bluish-white and the shanks and toes are pink in adults. Eye color is dark brown. The skin is usually white, as in all turkey varieties, but some writers note a yellow tinge to the skin that is not seen in other varieties. This may be influenced by diet, as turkeys on range with access to green feed and corn tend to have a more yellow cast to the skin.

The standard weight is 23 pounds for young toms and 14 pounds for young hens, making the Black turkey slightly smaller than the Bronze. However, since they haven’t been selected for production attributes in years, many birds may be smaller than the breed standard. Careful selection for good health, ability to mate naturally, and production attributes will return this variety to its former stature. While generally known as the Black turkey, the terms “Norfolk Black” and “Black Spanish” are also used in the United States, though in the end, all these terms refer to the same variety.

The Black turkey is in need of more stewards. A renewed interest in their biological fitness, survivability, and superior flavor has captured consumer interest and created a growing niche in the market. This personable, attractive bird can recover to its early 20th-century status with the help of a few more conservation-minded producers.