Devon cattle were developed over several centuries on the southwestern peninsula of England. The breed’s name comes from Devonshire, though cattle were also raised in the neighboring counties of Cornwall, Somerset, and Dorset. Devons were valued for the production of both high quality beef and the rich milk used in Devonshire cream. They were especially well regarded as the quickest and most active oxen in the British Isles. The breed also had the reputation as an easy keeper, able to thrive on rough forage. (The Devon is sometimes called the North Devon to distinguish it from the South Devon, a large, dun beef breed to which it is not closely related.) 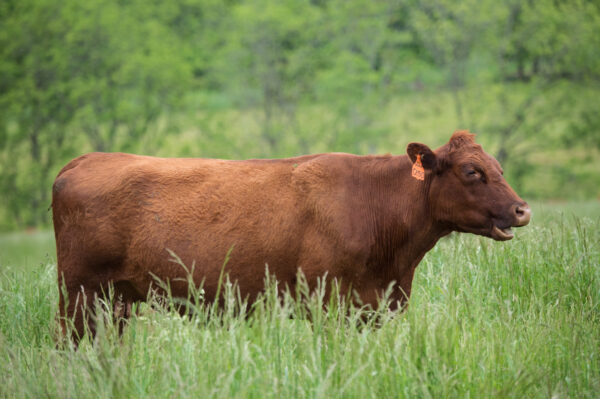 The Pilgrims brought Devon cattle with them to New England beginning in 1623. The hardiness and practicality of the breed, plus the availability of Devon cattle near the ports of departure, made Devons an obvious choice for early immigrants to the Americas. The breed became well established in New England during the 1600s and spread down the coast as far as Florida during the 1700s and 1800s. The cattle also went west, as Devon oxen were the draft animals of choice on the Oregon Trail. A registry was established for the breed, and herdbooks have been published since 1855.

By the late 1800s, however, the Devon had been gradually replaced by the Shorthorn, a more productive multi‑purpose breed. By 1900, Devons were rarely seen outside of New England. Only in this region did the breed continue to be valued for hardiness and the ability to thrive under rugged conditions, qualities in which it surpassed the Shorthorn.

By the 1950s, the market for multi‑purpose cattle had disappeared and the Devon breed neared extinction. In response to this challenge, the breeder community split. The majority of breeders began to select intensively for beef production in order to compete with other beef breeds. This population was called the Devon, Beef Devon, or Red Devon. A few breeders continued to select their animals for meat, milk, and draft; this population was called the American Milking Devon. Beef selected Devon cattle populations are found in several other countries, including Britain and Brazil, though the long separation of these populations makes it unclear whether they are still a single breed. Research continues into the status and characteristics of Devons internationally.

The Red Devon has several assets, which recommend it for use in today’s competitive beef market. The breed’s history as a dual‑purpose animal gives it greater maternal ability than most other beef breeds. (Any decline in this characteristic is easily corrected through the use of a Milking Devon bull, which can be registered in the Devon herdbook.) The Devon is known for high quality beef, and the breed’s hardiness and grazing ability makes it an excellent choice for grass based production. The Devon is distantly related to other British and European breeds found in North America, so it provides great hybrid vigor when used in commercial crossbreeding.

Interested in the history of Devon cattle in the United States? Read this article, which first appeared in the Devon News, courtesy of Jeremy Engh.

Notes:
Beef, oxen,  hardy and efficient for grass based production