Black Orpington chickens from the poultry yards of William Cook and Joseph Partington were imported into Australia between 1890 and about 1900. In England during this same period, Black Orpingtons were being refined for their meat qualities. However, the Australians immediately valued the breed for its egg-laying ability and continued to breed along the lines of the original type. The Australians were very practical poultry breeders, and so with egg production as a singular goal, they made outcrosses to Minorca, White Leghorn, and Langshan chickens – even as William Cook had in the creation of the Orpington. The end result was an excellent production chicken, but one which little resembled the Orpingtons bred in other countries. 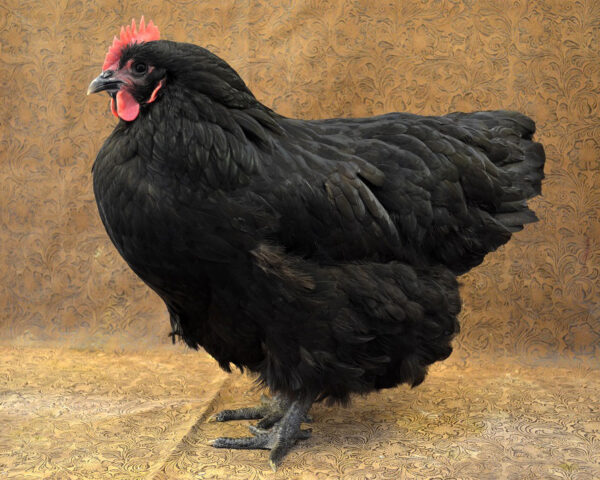 In 1902, during Australia’s winter season, the Hawkesbury Agricultural College held a six-month egg-laying contest among various breeds of chickens. With 41 pens in all, Black Orpingtons took seven of the thirteen top placements. This was the first of many egg-laying contests in which Australian-bred Orpingtons would compete. By 1922-23 “Australian Laying Orpingtons” were setting records. At Geelong, Victoria, a pen of six “Australorp” hens set a world record by laying 1,857 eggs in 365 days – an average of 309.5 eggs each. At the Grafton contest in 1923-24, an Australorp hen laid 347 eggs in 365 days. Soon after a hen of the Burns bloodline broke the world record, laying 354 eggs in twelve months. Another hen set a new world record when she laid an amazing 364 eggs in 365 days!

The Australorp chicken became distinct from the Orpington chicken due to divergent breeder goals – meat production for Orpingtons, egg production and the competition to win egg-laying contests for Australorps. Five primary bloodlines of Australorps were developed during the period between 1900 and 1922: Graham, Burns, Christie, Bertelsmeier, and Drewitt. While these breeders used different crosses on the imported Orpington chickens, all developed their lines based on the general type originally released by William Cook. They also all bred to eliminate broodiness, and this had much to do with the commercial success and the establishment of these chickens as their own breed.

With such great successes in the egg-laying contests, poultrymen worldwide became interested in these chickens. Many were imported into England and America in the early 1920s. Breeders struggled to distinguish them from Orpingtons, and many names were applied, such as Australs, Australian Utility Black Orpingtons, and Australian Laying Orpingtons. Finally, during the early 1920s the breed was identified as Australorps. They were recognized in the American Poultry Association Standard of Perfection in 1929.

Australorp chickens are a medium-weight breed with fairly close-fitting feathers. The breed has a moderately long and broad back, legs set well apart with moderately long black shading to slate shanks with bottoms of the feet and toes pinkish-white. Their beak is black, eyes are dark brown. They have red earlobes and a moderately large red single comb with no more than 7 points. In the U.S. they are found in only one color variety, black, although there are other colors recognized outside this county. Males weigh 8.5 lbs. and females weigh 6.5 lbs.

A backyard Australorp lays 250+ tinted to light brown, medium/large eggs a year; eggs average 26-27 ounces per dozen. They are generally considered good sitters and mothers. They do well in confinement as long as they are also allowed to do some foraging, which they enjoy. If they are kept only in confinement, they may get fat. Due to their black color, they do best if they have ample shade in warm weather so they don’t get overheated.

They are friendly (even the roosters) and are a good breed for children who want to show in 4H or other youth competitions. They do well with other breeds with like temperament.