The ancient and rugged Andalusian chicken has an unknown past, though it is possible that Andalusians were created by breeding local landrace chickens (Black Castilians) with other local breeds. In type, the breed resembles the Spanish chicken, but weighs a pound less.

Andalusian chickens were first imported into England by Leonard Barber in 1846-47. These birds came from Xeres de la Frontera in Andalusia, about 25 miles from Cadiz. In 1851, Mr. Coles of Farnham and John Taylor of Shepherd’s Bush imported more. These birds were paler in color, a more washed-out blue than those we have today. The English set about enhancing and improving the color. The breed was first exhibited at the Baker Street Show, in London, in January of 1853. Some sources state that Andalusian chickens were widely distributed around Cornwall and Devon. Others say these areas had their own version. 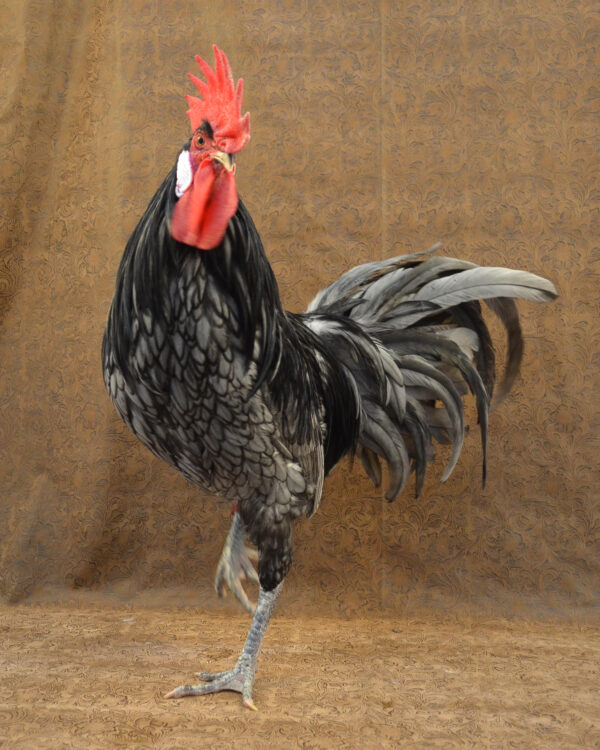 Andalusian chickens arrived in America somewhere between 1850 and 1855, and American breeders continued to work to improve the breed. The Blue Andalusian chicken was recognized in the American Poultry Association Standard of Perfection in 1874.

The chief distinction for Andalusian chickens is the blue color of their plumage. Each feather should be a clear bluish slate, distinctly laced with a dark blue or black. (The Spanish refer to the laced varieties as “English Andalusians”; “Spanish Andalusians” are not laced.)

Blue-colored birds are produced by crossing black Andalusians with white. When two Blue Andalusians chickens are mated, 25% of the chicks will have black plumage, 50% blue, and the remaining 25% white or splash (white with blue or black splashes). The blue ground color should extend down to the fluff.

Like other Mediterranean breeds, it has white, oval shaped earlobes, horn-colored, downward curving beaks, black or slate blue legs, and reddish-brown eyes. Roosters have a single, bright red comb with five defined points. Hens have a medium to large, red, single comb that can flop to one side. Males weigh 7 lbs. and females weigh 5.5 lbs. Chicks feather and mature quickly, with males crowing at seven weeks old. The body type – more coarse than a Leghorn – is easy to produce and maintain.

Andalusian chickens stand high in productivity, laying about 160-200 medium/large white eggs each year, and they are excellent winter egg producers. Hens are rarely broody. The breed has white flesh with plenty of breast meat – though the carcass isn’t very plump,

Andalusian chickens are wonderfully designed for foraging on the range. The breed’s rugged nature makes it hardy, even in cold climates. However, it doesn’t stand confinement well and is predisposed to feather eating. This breed is not aggressive with people but is not the best choice if you want a “pet.” If they are given enough space, they do well with other breeds, but can be bullies if there is not enough room if they are confined. Andalusians are not excessively noisy, but they are not a good breed if your neighbors don’t appreciate loudly crowing roosters. While they can live in colder climates, they were developed in Spain, so are better suited to locations that are warm most of the year.

An excellent traditional cross is an Andalusian male over Langshans females. This produces a hardy brown egg layer that matures early.