All around the Mediterranean there are small-bodied landrace chicken breeds that lay a large number of white eggs. Several of these have traditionally been bred for centuries, and geographic isolation has contributed to their unique qualities. The Ancona chicken is one of these.

The Ancona was originally bred in the Italian central east coast in the Marche region, and gets its name from the seaport city, Ancona. They were developed from a mixture of breeds, including early Leghorns, resulting in a hardy and prolific bird. 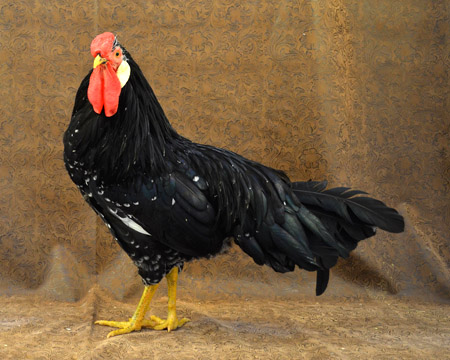 The breed existed for centuries before being “discovered” by English poultry enthusiasts around 1850, where it was maintained until a second importation in 1883 when it began to gain some popularity. Around 1888 Ancona chickens from England arrived in America. The first importation was made by Francis A. Mortimer of Pottsville, PA, but he died soon after and interest in the breed waned. In 1906, H.C. Sheppard of Berea, OH, also imported some of the best Anconas he could find in England, where they were increasing in popularity, and they soon became a well-known and popular breed.

Ancona chickens were recognized in the American Poultry Association Standard of Perfection in 1898 for the single comb variety (largely on the strength of their popularity in England) and in 1914 for the rose comb variety.

Early imports were coarsely mottled, and were often more white than black which few people found attractive. But by 1906, Anconas in England had become darker, and in America, the darkest birds were preferred so that many show winners were almost black. This color preference caused a revival of interest in the Black Leghorn, so eventually fanciers chose their breed based on their personal preference.

The current Ancona chicken standard calls for a distinct plumage color pattern – black ground color mottled white (v-shaped specks). On the ideal bird, one out of every five feathers is tipped with white. As with other mottled colored breeds of poultry, there is a tendency for the mottles to increase in size and quantity as the chicken ages – historically called “going gray” – so darker birds are preferred when they are young. Older breeding birds that were nicely mottled when in their prime can be used for breeding even after exhibiting too much white in their plumage. But a word of caution, young stock should not be culled for excessive white too early as many, when mature, will be nicely colored.

Ancona chickens have clean, bright yellow legs, often with a few black mottles, reddish bay/orange-red eyes, yellow beaks with black stripes on the upper mandibles, white or pale-yellow skin, and white ear lobes. Single combs are more common, but they can also have rose combs. The single comb on females tends to flop to one side. Males weigh 6 lbs. and females weigh 4.5 lbs.

Both varieties are non-sitters (not broody) and excellent layers of white-shelled eggs. Anconas can lay about 220 eggs per year. The chicks hatch a canary and black in down color, and feather and grow quickly. Pullets will often begin laying at five months of age.

Ancona chickens are very hardy, fertile, and prolific. They can be a bit wild in their habits – easily flying to avoid potential dangers and ranging over a great area when foraging. They stand frost and snow quite well, although care must be taken with the single combed variety to avoid frostbite. They are not as prolific annual layers as Leghorns, but they surpass Leghorns as winter layers.

This chicken was once very popular and one of the prime egg producers in Europe. They are currently popular in the US and England, but are rare in the native area of the breed, Italy. However, in 2000, an initiative was launched to re-establish Anconas in the Marche region to preserve their biodiversity.