Sometimes it is only in retrospect that you realize something you’ve started was successful. That is certainly the case with the Facebook group, “Cotton Patch Goose Breeders.”

In 2012, when I attended The Livestock Conservancy’s conference in Durham, NC, I made the acquaintance of Gus Richey, Sarah Howell and her husband Steven. What all of us had in common was ownership of geese that were purported to be Cotton Patch. This name is a modern one, given by default to an autosexing landrace that was for the most part just called “geese” by the homesteaders that used them for meat, eggs, down, and weeding mostly in the Southeastern part of the United States. There were most likely other colloquial names for them, including “cotton,” “tobacco,” “Choctaw,” and another modern name, Old English, although that pre-dates Cotton Patch.

Origins of the Group

When we met, we were lamenting the lack of information available, and thus the direction to potentially take any personal breeding programs. I remember sitting at a table with other waterfowl breeders, including John Metzer, and laughing that this was probably the first meeting of the Cotton Patch Goose Club. To think that a decision that came out of that meeting would lead to the current status of these geese would have been just as laughable.

After leaving the conference, the challenge of maintaining communication while simultaneously collecting information proved to be a question mark. At that time, the main “hangout” for group discussions of any kind was Yahoo, and indeed there had been a short lived Yahoo group that only saw activity between potentially 6 or so individuals. After trying a couple of dead end ideas, I suggested using Facebook groups. While not particularly a fan of social media, it appeared as though the interface was simpler, and the options for sharing information better. Additionally, a lot of people were already using the platform on a personal level. With that in mind, I launched the group in December of 2012, using one friend as a guinea pig. I solicited the few individuals that had been active in the Yahoo group.

The initial plan was to network and share information but there was really nothing new to share between the first group members. What information existed then was scant, and was sparingly supplied by Tom Walker, of Bastrop, Texas. Although widely credited with being the sole savior of these fascinating geese, we had become aware of several other people that had either discovered some old isolated gaggles or were themselves long time breeders of them.

We decided to open the group to a wider audience, and by magic, people started finding us, which I and my helper administrators discovered we were not really ready for. There is no textbook out there for what we were trying to do. We were essentially at ground zero.

When a couple of those long time breeders showed up, as well as others who had been searching for gaggles alongside Tom Walker, we were giddy, and it became obvious that this social media thing had value other than sharing memes and jokes. Finally, more information from a grass roots level began to filter in. The days of “someone told me this” started to fade. One of the advantages of sharing in this type of forum has proved to be the melding of historical information along with real-time unfolding events.

The next year was a flurry of often confusing exchanges centering on just “what” Cotton Patch Geese are, or “should” be. In a 2005 article published by the The Livestock Conservancy, Mark See wrote, “There is a relic landrace goose in America. It is not a recent European import such as the West of England or the Shetland goose. It is not the standard Pilgrim goose either…Although it might have played a role in the development of that breed (a subject for another article). This is an old American breed of goose.”

Using that as a basis for conversation verses an undercurrent of the desires of a few for standardization some wrenching and ultimately hurtful discussions were fueled. Additionally, one of the ugly side-effects of rare breed acquisitions started to crop up. Being at essentially ground zero, and excited at the networking opportunities, sharing of stock began to occur. That ugly side effect? Some of those early members had become involved, not in the name of conservation, but in the name of the almighty dollar sign. The final upshot was that poor practices, including the commingling of more than one breed meant that stock from contaminated sources flowed out into the gene pool.

To say that the will to continue after that first year was difficult to maintain is an understatement.  However, there had been enough discoveries and enough committed people of integrity that it still seemed as if trying a while longer was the right thing to do. Eventually, the pressures of the community for integrity proved to outweigh those committed to the dollar signs and they slowly disappeared. With a mandate to continue piecing together the history of the geese and to learn just what we were working with, the top of the mountain seemed to be in sight. And, in fact, as of the writing of this article we are within reach of 1000 members. Astonishing really, given that this is a somewhat obscure breed of goose, an underappreciated member of the livestock complex to begin with.

An order of business, and one that is still ongoing, is writing the breed description. This has been at the heart of discovery, since we needed to describe “what is” as opposed to a standardized breed, where a standard is written to be achieved. We have used our Facebook networking capabilities to compare notes across a good cross-section of geese that trace back to verifiable old gaggles. It has been astonishing to find that these old autosexing homestead geese resemble each other in such an amazing degree. Especially, when you consider the words in Mr. See’s article, “these geese are not a created breed.” There are variabilities in terms of things like overall size, sometimes stature, number or size of lobes, and weight to name a few. However, all are easily recognizable as the same goose.

There did not seem to be any information available in regards to the relationship between genotype and the expression of phenotypes in the female geese especially. Most of the standardized breeds are composed of females that express either a solid greyish feather pattern with some white particularly in the face, or a saddleback pattern, which we have chosen to call “pied” after the European definition. The males matured to white, with variability in the amount and placement of grey on the body. Our landrace is composed of gaggles that have one or the other, and often both in the same group. Looking for patterns as opposed to eliminating individuals because they did not fit one or the other has given us an opportunity to explore.

Social Media as a Way of Saving America’s Landrace Goose

Using several years of breeding trials that I took on and have documented, as well as networking through the group some surprises revealed themselves and might explain some of the mysteries of occasional anomalies in the standardized autosexing breeds. In particular, it became evident that although the ganders themselves turned white, they express similar patterns to the females while in the down stage. These patterns quickly disappear when they begin feathering out, and cannot with any degree of certainty be discerned after that. The heritability of the pied pattern and solid patterns mix when the two are interbred, and some indications of which geese possess genetic material that can be expressed in either pattern is being tied down. Some more breeding experiments need to be done in order to be more certain. We have developed a guide for goslings that provide visual information for the heritability we have documented and is available to anyone who belongs in our Facebook group.

To sum up, without the networking available through social media, the information we slowly uncovered would never have come to light. There is a lot to finish sorting and organizing so that we are not faced with answering questions on an almost daily basis that could be answered by having everything in one place. A boon to Facebook is the ability to often answer questions in real time, but the drawback occurs when that isn’t possible due to obligations, and the patience to wait is seen as a rebuff. Face-to-face or spoken encounters have more nuance than the typed word, especially if you are tired or in another time zone.

Despite that particular issue, we have been able to assemble a large group of people who are interested in conservation breeding for the right reasons. Our Mission Statement is to “Save America’s Landrace goose – the perfect homestead goose.” We emphasize that breeders preserve and promote the very issues that made them an eventual monolithic population despite geographical isolation. They are essentially a utility goose: small to medium in size, autosexing, gentle in nature yet protective of their brood, display good parenting skills, are amazing foragers, have the ability to fly, (which can be a boon or a problem) and are excellent for culinary use. They are one of only 3 geese listed with the Slow Food Ark of Taste. And, they are beautiful to see and enjoyable to watch. 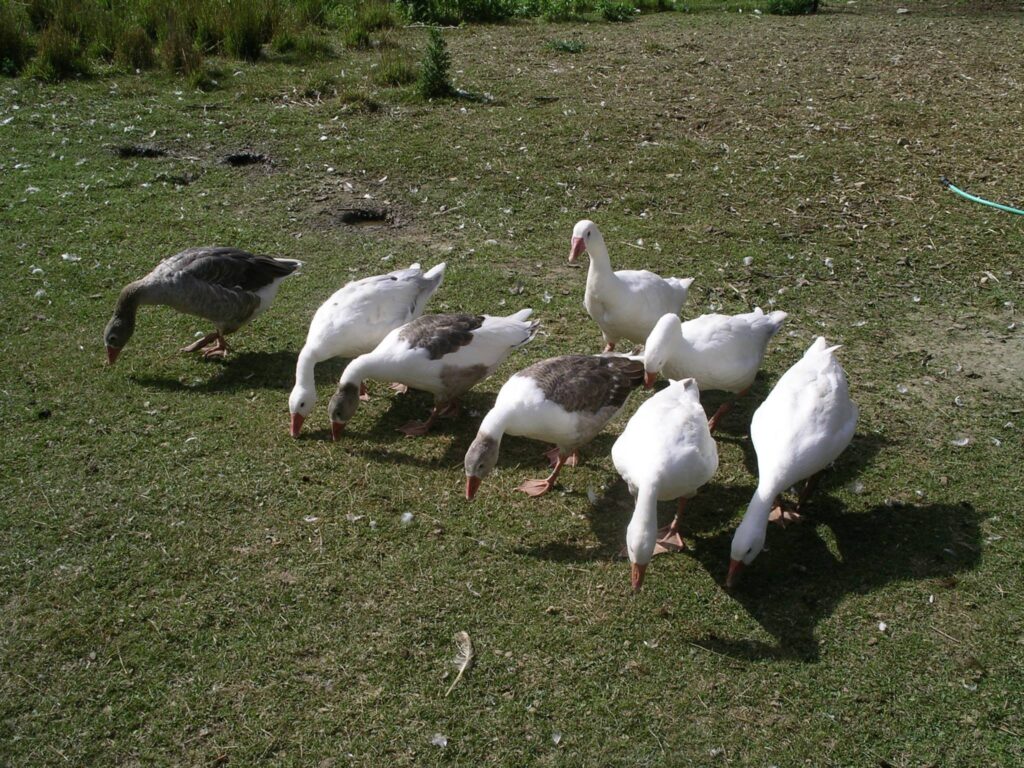 As people have wandered in, we have re-discovered remnants of some supposedly lost gaggles, discovered new ones, and sadly discovered some have been almost eliminated. Many gaggles are composed of individuals from several foundation gaggles and as such, possess a lot of genetic diversity. There are also individuals who have been able to maintain enough numbers of foundation gaggles that we hope to be able to maintain genetic diversity for the foreseeable future. Several people have recognized their utility value and are integrating them into rotational farming, permaculture, and orchard situations, where they excel. With green forage available, little to no additional feed is necessary.

Without the use of social media, this old landrace would most likely have fizzled away or been compromised. Without the ability to document and share, we would never have been able to define what we are working with. We don’t ever know what the future will hold, but at least right now, thank you Facebook. And that is a phrase I thought I would never ever say.

This article originally appeared in our Spring 2018 newsletter. To receive our newsletters, become a member of The Livestock Conservancy.

Become a Member
Learn More about The Livestock Conservancy 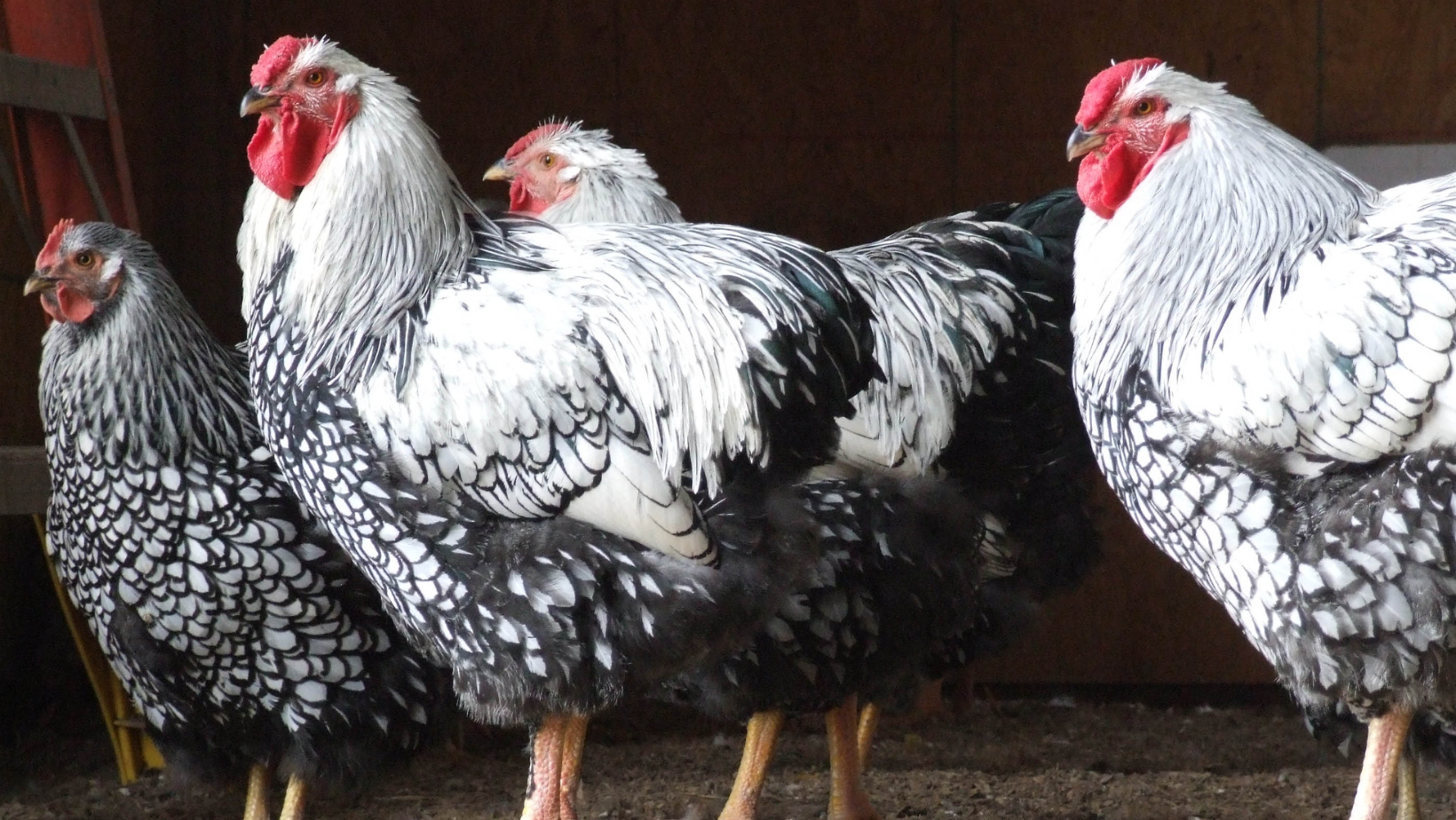