Celebrating a Century of Exmoor Ponies 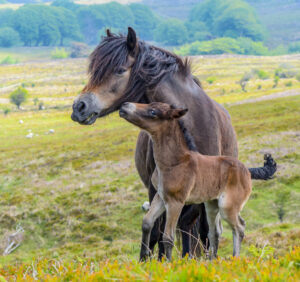 Exmoor, home to one of the United Kingdom’s rarest equine breeds, is a wild upland area of 430 square miles, straddling the counties of Somerset and Devon in South West England. Managed by the Exmoor National Park Authority, its northern boundary is made up of craggy cliffs overlooking the Bristol Channel. Dropping down to lush farmland in the South, its highest point is Dunkery Beacon at 1,700 feet above sea level, from where, on a clear day, you can see across the Bristol Channel to the mountains of South Wales.

The moor is characterized by wide expanses of rough grassland and heather, dotted with gorse bushes, known as Commons. Intersected by deep valleys known as combes that are cut by fast flowing streams, the Commons is where you are most likely to find the iconic native ponies grazing.

The ponies have grazed these moors for centuries, probably thousands of years, and are remarkably well-adapted to survive the harsh environment of Exmoor. Icy winds sweep off the Bristol Channel in the winter bringing heavy snow and rain. The ponies evolved many survival characteristics enabling them to endure the extreme weather.

The breed standard, as laid out by the Exmoor Pony Society, reflects their ability to survive in the harsh moor environment. They are short and stocky, rarely over 13hh, preferably 11.2 to 12.3hh. Their height enables them to find shelter in clumps of gorse and natural dips and hollows in the terrain.
To the untrained eye the ponies are almost identical with a uniform coloring of brown with light markings under the belly and inside the thighs. The mealy-colored muzzle and pale eye markings make them easy to identify. The muzzle should look as though it was dipped in a bowl of oatmeal. Their Pangaré coloring is also excellent camouflage on the moor, enabling them to blend in with the bracken and heather.

Exmoor Ponies also have short, thick ears, a wide forehead with large eyes set well apart, outlined by pale coloration, and prominent with a well-defined fleshy hood. Also known as a “Toad Eye,” the hood helps deflect the weather. The ponies have a deep strong jaw with large teeth and a fleshy tongue, allowing them to browse on gorse and other tough plants like thistles and rushes.

The muzzle is broad with large nostrils so that air can be warmed before it reaches the lungs. The neck is relatively short, which also helps to conserve body heat. A double-layered winter coat comprised of a short, downy insulating under-layer is topped by longer greasy hairs to repel water. This is essential in poor moor weather. The mane and tail are thick, with the tail having a fan of shorter hairs at the top known as the snow chute, which channels rain away from the dock area. In summer, the coat is short and glossy. 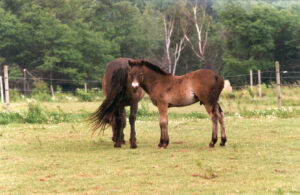 SETTING UP A STUD BOOK

The ponies thrived on the moor for many years, but in 1818 the Royal Forest of Exmoor, as it was formerly known, was sold. The outgoing Warden, Sir Thomas Acland, took 30 of the ponies and founded the Acland herd, now the Anchor herd. Exmoor farmers also bought stock at the dispersal sale and founded several herds, some of which are still in existence, such as Herd 23 on Withypool Common, Herd 12 on Dunkery, and Herd 44 at Litton.

In the early 20th century, it became fashionable to “improve” native ponies through cross-breeding to produce finer riding ponies. The Exmoor Pony Society was soon founded by local enthusiasts who wanted to preserve the purity of the breed. The primary objective was to form a stud book to register purebred ponies and ensure the future of the ponies for generations to come.

The inaugural meeting was held at the Red Lion Hotel, Dulverton, in the heart of Exmoor on March 10, 1921. The newly formed Exmoor Pony Society (EPS) first formulated a breed standard, which is little changed today. Every pony entered into the stud book must meet standard.

The next few years were spent with highly-experienced breeders inspecting ponies for acceptance into the stud book as foundation stock. Closed in 1961, only foals from parents already registered in the stud book can be accepted for inspection and registration. Every foal is still inspected to ensure it meets the standard. If it does not, the foal is entered into Section X, which denotes purity and pedigree but is considered below the required standard.

Appointed by the EPS, the first foal inspectors were moorland breeders who had generations of knowledge about the breed. As the ponies’ popularity grew and they became more widespread with breeders throughout the UK, the inspection system became more formalized. Potential inspectors had to be EPS members with previous pony involvement. Once accepted, inspectors completed a three-year training, which included handling and assessing foals, and learning to brand with hot irons.

Today, only ponies spending their lives living free on the moor are branded, in compliance with UK law. The vast majority of foals are now identified by microchip. DNA samples are taken from all foals for identification analysis and a complicated system of paperwork, including for a passport, is completed. That said, inspection time is still one of the highlights of the Exmoor pony year, presenting the opportunity for enthusiasts new and old to get together and discuss their favorite subject.

ON THE BRINK OF EXTINCTION

In the 1930s, Exmoors were popular childrens’ riding ponies because of the success of the Moorland Mousie stories penned by “Golden Gorse.” On Exmoor, as they had for generations, ponies carried the farmers shepherding, hunting, to market and even ploughed the land, while the unhandled breeding herds continued to graze the Commons.

After the end of WWII, the late 1940s nearly saw the demise of Exmoor Ponies on the moor. Many were taken for food, leaving the population dramatically reduced, with only around 50 purebred ponies surviving. Thanks to Withypool resident and keen pony breeder, Mary Etherington, the farmers and moorland breeders were encouraged to work together to re-establish their herds. Free living herds were also established in Cumbria and Scotland, providing a reservoir of genetic variety.

Despite their increased numbers, Exmoor Ponies are still included as category two, endangered, on the Rare Breed Survival Trust (RBST) watch list and listed as critically endangered by The Livestock Conservancy. Fewer than 200 foals are registered most years and only around 500 mares are in active breeding situations. The breed has a relatively small gene pool and the overall genetic health of the breed, as a whole, is regularly monitored.

At the beginning of the 20th century, the majority of the Exmoor pony population was found on Exmoor itself. Today, a few hundred ponies roam the moor while the rest are scattered across the UK and other countries, including the United States and Czech Republic.

The EPS has worked closely with RBST and other organizations to ensure the future of the breed. EPS members and breeders Debbie Davy and Michael Dewhurst recently received the Marsh Christian Award, presented by RBST for conservation in genetic biodiversity. An exciting and innovative Ph.D. project at Glasgow University in Scotland was also funded by the EPS. Results will have an important impact on the ponies’ future survival on the moor.
These days the Exmoor ponies turn their hooves to many activities. Some grace the show ring with great success, others are family pets, and some are active in competitive disciplines such as dressage, long distance riding and cross country. Some are now becoming conservation grazers. Their hardiness and grazing technique make the Exmoor Ponies ideal for helping to restore a variety of natural habitats.

***
The Society will continue as a guardian of the breed as long as it is needed by the ponies. Learn more at www. exmoorponysociety.org.uk 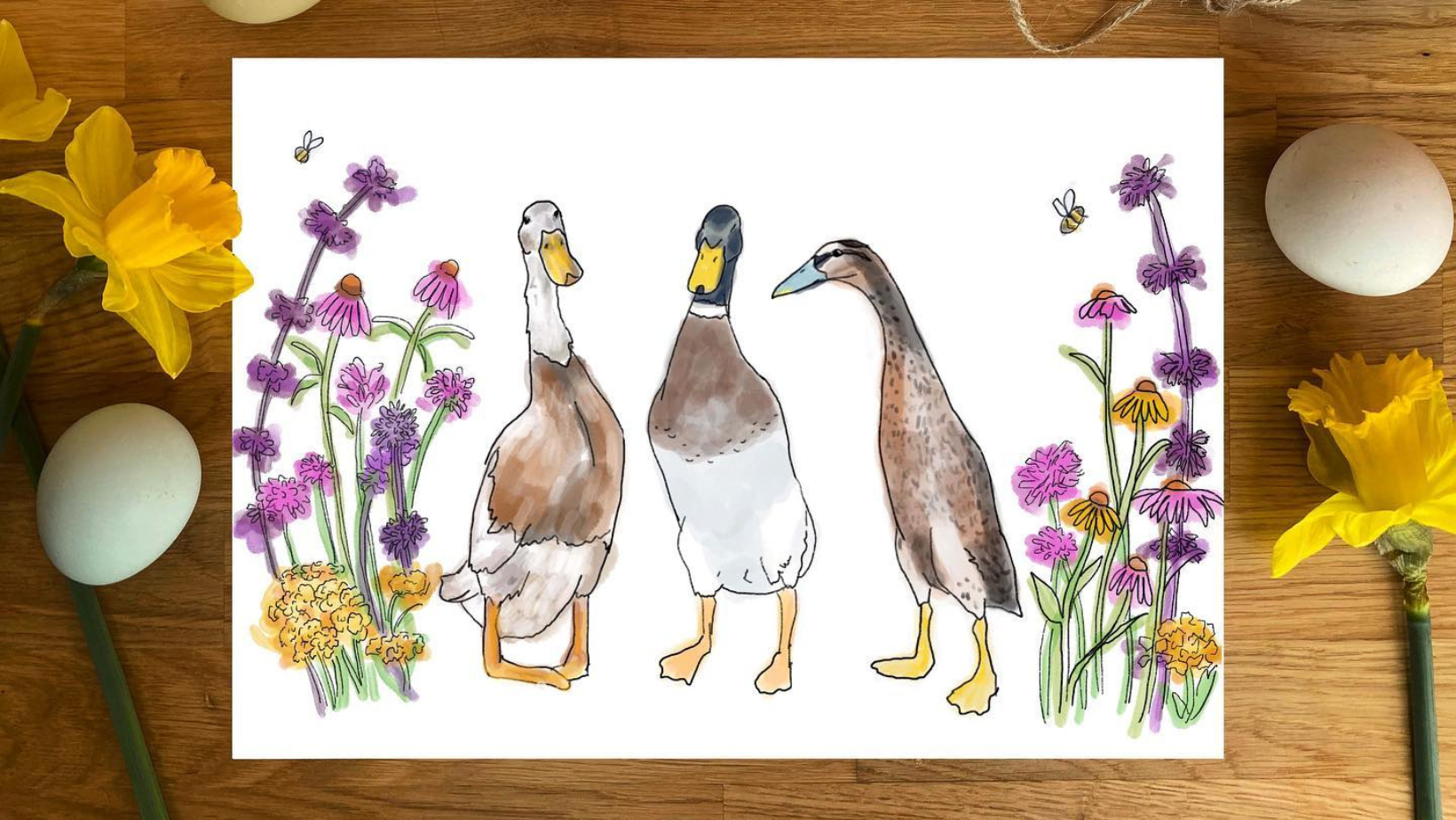 Gifts for the Duck (or Chicken) Lover in Your Life