The Wiltshire Horn is native short wooled sheep breed to southwestern England in the county of Wiltshire, from which the breed gets its name. Sometimes referred to as Western or Western Horn sheep, they descended from the large, white sheep that grazed on Salisbury Plain for centuries. The Wiltshire was the dominant type of sheep across southern England during the 1700s. Populations of 500,000 – 700,000 are estimated to have ranged in the region at that time. In the 1800’s the breed began to see decline with the introduction of Southdown, Ryeland and in particular the Merino breed to the region. Although they became rare, steadfast supporters of the Wiltshire horn held on to their animals and kept the breed from extinction. To support the integrity and long term survival of the breed, on January 13th, 1923 the Wiltshire or Western Sheep Breeders Association was formed by Wiltshire Horn producers in England. 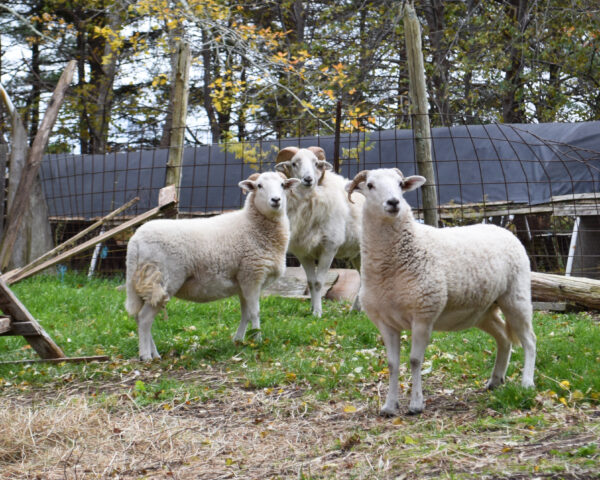 Wiltshire Horn sheep were exported from Britain to several other countries during the 1950s and 1960s, including Australia and New Zealand, Kenya, Venezuela, Argentina, and France. Only in Australia and New Zealand, however, were large purebred populations maintained. This is not surprising given that the breed’s purpose was to be used in crossbreeding. Today the Wiltshire Horn is globally rare, though it is slowly increasing in numbers.

Wiltshire Horn sheep were first documented in North America in 1624 at Plimoth Plantation. The breed persisted for some time, though it was not numerous and was never well documented in the historical record. During the 1970s, Wiltshire Horns were again imported to the United States, this time from Australia. The animals were used by Piel Farm in Maine in the development of a modern hair sheep breed known as the Katahdin. In the 1990s, Wiltshire Horn sheep a second wave of importations to the U.S. greatly increased the genetic breadth of the American population.

The sheep are large in size, with mature rams reaching weights of 300 pounds or more. The distinctive coat consists of a mixture of wool and fine hair that is shed in the spring. Both males and females have impressive spiral horns. Lamb crops average about 160 percent. The breed is hardy with excellent maternal ability, but depends upon high quality nutrition and good management to meet its potential.

Wiltshire Horn sheep were traditionally used for the production of mutton and also selected for use as terminal sires for commercial lamb production. When bred to commercial wooled ewes, Wiltshire rams impart both size and hybrid vigor to offspring. The breed is distinguished by its self-shedding hair coat.