The Welsh Harlequin originated in 1949 from two mutant light-colored ducklings hatched from pure Khaki Campbells by Leslie Bonnet, a duck breeder living near Criccieth, Wales. In 1968, John Fugate imported hatching Harlequin eggs to Tennessee, but by 1980, descendants of the original imports were confined to two small flocks. To broaden the gene pool, breeders imported additional Harlequins in 1982, and in 1984 they began to offer birds for sale in the United States. The silver variety of the Welsh Harlequin was accepted by the American Poultry Association in 2001. 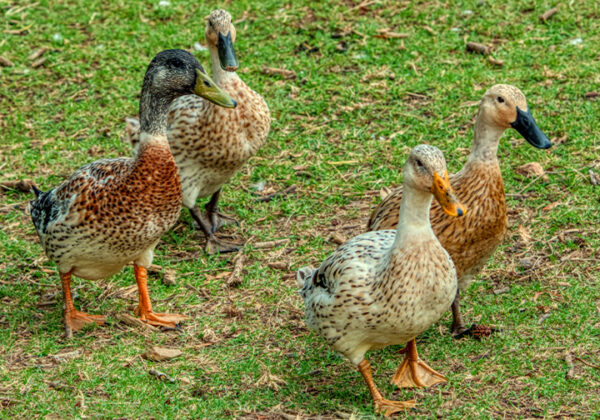 The Welsh Harlequin is a lightweight breed at 5 to 5.5 pounds. Harlequins are streamlined, with relatively long bodies, medium-width backs, rounded chests, moderately full abdomens, and wide-spaced legs. Their necks are topped with trim, oval heads that sport medium-long, slightly concave bills. The color and patterning of the Harlequin are complex. The drake’s head is greenish-black, shoulders reddish-chestnut frosted with white, and breast creamy with reddish-chestnut. The upper back has a tortoiseshell of cream, white, brown, and chestnut while forewings are cream-white and reddish-brown, with a shiny green and bronze cross-band.

The tail is blackish/bronze edged in white, the legs and feet are orange, and toenails are brownish-black. The duck has a creamy white head with brown stippling. There is often delicate light rust or burnt orange blush to their head, neck, and breast. The crown of the head typically has more brown stippling than the rest of the head. Her body is creamy white with buff and brown-green or bronze bands on her wings. Her tail is a mixture of creamy white and brown. Her legs are orange when young, and brown when older. Toenails are brownish-black. Welsh Harlequin duck and drake ducklings may exhibit a subtle sex-linked difference in bill color at birth (Holderread 1985)