The name Tunis describes the breed’s connections to foundation stock from Tunisia in North Africa. North African sheep, variously described as “fat tailed,” “broad tailed,” and “Barbary” sheep, were imported to the United States as a gift by the Bey of Tunis to George Washington in the late 1700s. The pair was placed with Judge Richard Peters of Belmont, Pennsylvania, who made rams available and gave away lambs to help spread this sheep breed to others. References to these sheep appear in letters, journals, and farm records of some of the leading agriculturists and citizens of the day, including John Adams, Thomas Jefferson, Richard Peters, Charles Roundtree, and George Washington Custis. Gradually, a uniquely American breed was created from this stock. Tunis sheep were a recognizable breed by the late 18th century to early 19th century making them one of the oldest breeds of livestock developed in America. 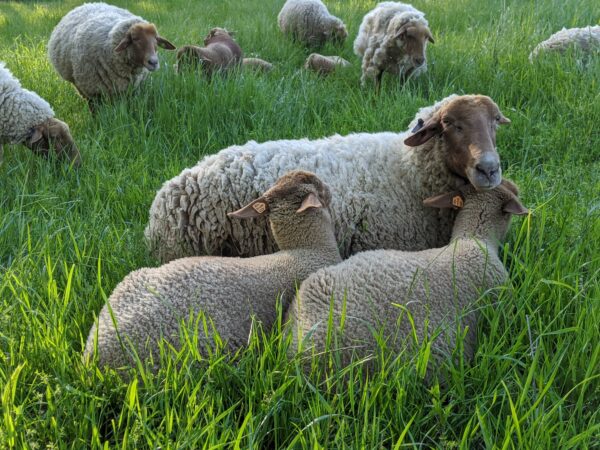 Tunis sheep spread throughout the mid Atlantic and southeastern United States and were well adapted to the heat and humidity of these regions. The Tunis was the mainstay of sheep production in the upper South and mid Atlantic regions until the Civil War, when nearly all Southern stock was destroyed. Credit for saving the breed from extinction at this time is given to Maynard Spigener of South Carolina. During the war he protected the last flock of Tunis by hiding them on his land along the Congoree River near the city of Columbia. After the war the Great Lakes region and New England became strongholds for the breed. It is only recently that the Tunis has again been seen in the Southeast.

Tunis are striking in appearance, with red faces and legs and ivory colored fleeces. Their clean heads and lop ears are distinctive, and the breed gives the impression of activity and intelligence. The sheep weigh 150–275 pounds and both sexes are polled. Lambs are born with a double coat of red fiber on their bodies to protect them from the elements. They gain a lighter fleece with maturity, but retain red legs, heads, and ears.

The Tunis is a very docile dual-purpose breed that has been selected primarily for meat production. Market lambs are economical to raise and produce high quality carcasses with excellent meat to bone ratios. The fleece is medium-grade wool, which turns white during processing. Fleeces weigh seven to twelve pounds and have a staple length of three to five inches. Ewes are prolific, fertile, and consistently produce twins. They are heavy milkers and make attentive mothers. Tunis sheep are good grazers and easy keepers, allowing them to thrive in forage based production systems.

The Tunis sheep breed has benefited in recent years from the growing sustainable agriculture movement in the United States and is now increasing in numbers. The breed is becoming increasingly recognized for its good potential for low input production of meat, wool, and perhaps milk.