The name Toulouse is used for two types of gray geese descended from the European Greylag goose. The breed was developed in a French region, Haute Garonne, in southwestern France. The city of Toulouse, from which this breed got its name, is the center of the region. The breed has been in existence since the 1400s; the original grey color variety is very old. Though they were known by reputation in England in the early 1800s, the first recorded importation was by the Earl of Derby around 1840 as an addition to his Knowlsley poultry collection. English breeders began importing the breed and standardizing it through selective breeding.

Toulouse geese were imported to the US from England and Germany between the 1850s and the mid-1900s. They were first shown in Albany, NY in 1856. The Grey Toulouse was recognized in the American Poultry Association Standard of Perfection in 1874. The Buff variety was admitted in 1977. 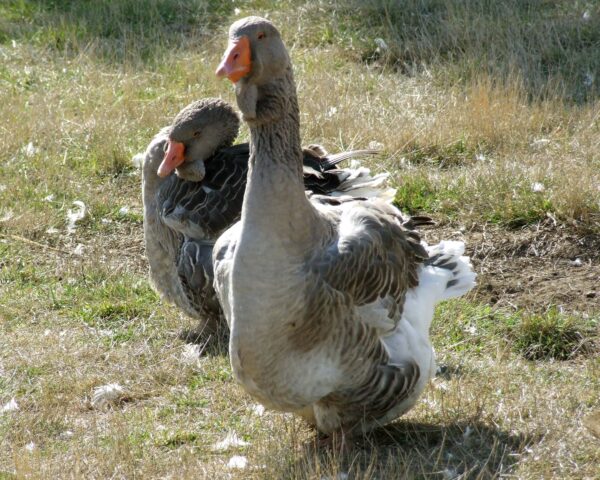 People have selected Toulouse as general-purpose farm birds, as producers of fois gras, and as show-birds. Oscar Grow, in his 1963 article “The Toulouse Goose,” discusses how trying to include both aesthetic and practical traits under the name of one breed is problematic. For this reason, The Livestock Conservancy recognizes one breed, the “Toulouse,” and two types: Production (in French, “Oie de Toulouse sans bavette”) and Dewlap (in French, “Oie de Toulouse à bavette”). People have bred the more numerous Production type as utility birds for small farms and homesteads. The Dewlap Toulouse is a massively-boned bird bred for its ability to rapidly gain weight and produce fois gras. The subset of these birds that is bred for exhibition may show an exaggerated dewlap and keel.

Production Toulouse are large (18-20 lbs.), moderate egg-laying (25-40 eggs/year) geese suitable for the home or small farm flock. Most gray geese on farms and homesteads are Production Toulouse or crosses. Their popularity comes from their availability, general practicality, and, to some, aesthetic quality. Production Toulouse are quite widespread and aren’t considered a priority for conservation. They can be distinguished from their non-industrial counterparts by the absence of a true dewlap, though the sides of the neck are deeply furrowed.

The Standard Dewlap Toulouse is a huge bird averaging 20-26 lbs. Some tip the scales at 30 lbs. or more. Because of their loose plumage, they often appear heavier than they actually are.

Every feature of this placid giant is massive. The bill is stout, the head large and broad, and the moderately long neck is thick and nearly straight. The bird often has a heavy, folded dewlap that is suspended from the lower bill and upper neck and increases in size and fullness with age. The body is long, broad, and deep, ending in a well-spread tail that points up slightly. They have a rounded breast, and often exhibit a wide keel. The abdomen is double-lobed and often brushes the ground, particularly in females during the early spring. When Dewlap Toulouse are relaxed, their carriage is nearly horizontal. Their back feathers should have a “ruffled” appearance. The Toulouse goose comes in two color varieties: Gray and Buff. The Gray bird should be a soft, even gray with back and flank feathers edged in near-white, and a white rump. The Buff color was produced from pure Toulouse “sports” by Paul Lofland in Oregon. They should be a buff color with the same color pattern as the gray. Both varieties have orange bill, legs, and feet, and brown eyes. Ganders weigh 20 (young) to 26 (mature) lbs. and geese weigh 16 (young) to 20 (mature) lbs.

In the past, goose fat was a primary source for cooking fats and lubricants. In the past, farmers often raised Dewlap Toulouse geese in cages to limit their movement, valuing their ability to put on large quantities of fat when fed plenty of food and given no room to exercise. Modern farmers fatten Dewlap Toulouse geese for production of foie gras or raise them on pasture to produce a large roasting bird. Even when not confined, these massive birds do not wander far from their food and water. During their first three months, Dewlap Toulouse geese must have access to unlimited food, with additional calcium provided to support development of their large frame.

The major considerations when choosing utility breeders are vigor, adequate body size, high fertility, and good egg production. Large keels and dewlaps are byproducts of selecting for large birds, and, in the past, these traits were emphasized in bloodlines selected for exhibition. If not carefully bred, all heavyweight breeds of geese may decrease in size every succeeding generation. Do not use birds with narrow or undersized bodies, excessively arched backs, keels with extremely rough underlines, slender necks, small dewlaps, and weak heads. Except in mature laying geese, tails drooping below the line of the back are often a sign of low fertility and lack of vigor. Breeders of production birds should take care not to select for excessive keels as these inhibit a bird’s ability to breed.

They are moderate egg-layers of 20-35 eggs annually, although some strains have been known to produce more. Seed stock is expensive, because they do not reproduce consistently until two or three years of age. Fertility and viability of eggs are often considerably lower than for other breeds, although productivity varies widely depending on management, strain, and individual birds. Also, due to their size, they often break their eggs, so using a broody surrogate or an incubator can increase hatchability. Best results with this breed come when pairing ganders with only one or two geese. Some breeders have produced twenty or more goslings from Dewlap Toulouse geese, but such records are the exception rather than the rule.

During the breeding season it is extremely important that producing birds are not overweight, but they do need an adequate supply of concentrated feed that is 18-22 percent crude protein. Fertility is highest when birds get sufficient exercise, access to succulent green feeds, and water for swimming. Standard Dewlap Toulouse are probably the most challenging domestic goose to raise successfully.

Dewlap Toulouse are a docile breed and can make good pets. They are “home bodies”, not wandering far from their food source. They are not as vocal as some other geese, but loud when they do vocalize. They are a good goose to raise for meat. A note of caution, their soft feathers may not dry out as quickly as the plumage of other geese. This can cause problems if they are not protected in times of prolonged rainfall, so they should always have accessible shelter. Also, they do not do well in a flock with aggressive breeds that would upset the gentle Toulouse.

For more information see The Dewlap Toulouse in The Magazine of Ducks and Geese. Grow, Oscar. 1963.