Tradition held that blue-colored ducks were exceptionally hardy, superior meat producers, and difficult for predators to see, making this type of duck popular in Europe for centuries. Blue ducks that became the foundation stock of the blue Swedish duck were reported in Pomerania in 1835, which at that time was part of the Kingdom of Sweden, but today straddles northeast Germany and Northwest Poland. Swedish ducks were imported into North America in 1884 and included in the American Poultry Association Standard of Perfection in 1904. Since then, they have been raised in modest numbers as general-purpose farm ducks, pets, ornamentals, and for exhibition. 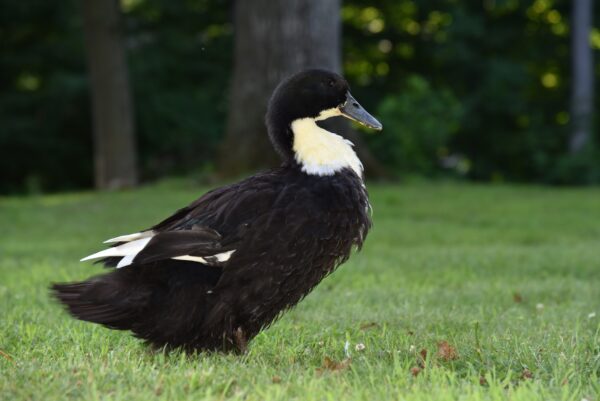 “The Swedish is a medium-sized bird that weighs between 6.5-8 lbs. It has an oval head, medium-length bill nearly straight along its top line, and a stocky body with a carriage approximately 20 degrees above horizontal. The plumage of both the duck and drake is a uniform bluish slate, with a white bib. However, the drake’s head is a dark blue with a greenish bill while the duck’s head and bill are the same blue slate color of the body. The legs of both sexes are reddish-brown, with irregular markings of greyish-black. The American Standard specifies that the outer two or three-wing flight feathers must be white, but this difficult specification has discouraged many breeders, and is unimportant for general use. While Blue is the only standard variety, Swedish ducks also come in Black, Silver, and Splashed color patterns.” (Holderread).

“The Swedish is a utility breed that matures fairly slowly and provides well-flavored meat. The Blue Swedish prefers to forage in orchards or paddocks, and grass and natural foods assist in the development of succulent flesh. In confinement, they do not thrive as well.” (Batty)