The Sumatra chicken is distinctive and beautiful, with long flowing curves, abundant tail feathering, and a rich green sheen. Originally from the Isles of Sumatra, Java, and Borneo in Indonesia, the birds existed in the wild and were possibly the basis for many existing breeds.

Historically, the island residents captured the males at the beginning of breeding season and used them for fighting, releasing them after the season was over. So the Sumatra chicken was first promoted as a fighting bird – something for which the breed was not truly well-suited. But Sumatra chickens were favored to produce fighting offspring – crossing well with Hyderabad, Rampur Boalia Black, or Sinhalese Game. 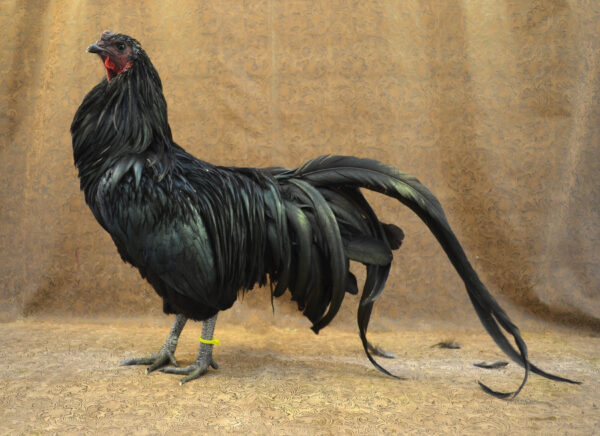 The Sumatra chicken was first imported into the United States in April 1847 by J.A.C. Butters of Roxybury, MA. There were subsequent importations by others in 1850-52. The breed went to Germany in 1882 where it was, at first, called “Black Yokohama”. Nelson A. Wood, of the Smithsonian Institute in Washington D.C., began with the breed in 1885 and is given much credit for refining the Sumatra chicken to enhance its flowing feathers and increasing its productivity.

Sumatra chickens are noted for their very pheasant-like behaviors, moving in a stately manner, and preferring to explore around bushes and other areas that offer good cover. It is also rumored that Sumatra chickens sometimes flew between the islands of Sumatra and Java.

The Sumatra chicken was recognized by the American Poultry Association Standard of Perfection and although it is small in size, the black variety was admitted as a standard breed in 1883. Today the breed also comes in Blue and in Dun varieties.

Sumatra chickens tend to reproduce very seasonally, the males vying for territory and breeding rights a few months of the year and living together in relative harmony outside of breeding season. The seasonal aspect of the Sumatra chicken is still very much a part of the breed today, and one can expect fertility and broodiness to arrive late in the spring.

In the wild, Sumatra chickens were found in a few color varieties, including black breasted red, although black was predominant. It is the Black Sumatra that was embraced by the poultry fancy with its long, flowing, low tail, beetle green sheen, gypsy-colored face (purple to black), black shanks with yellow soles, and its multiple spurs – often having three on each leg. Sumatras have small, sometimes almost non-existent wattles, and small earlobes. They have a small, vibrant red pea comb, and black skin and bones.The males average around 5 lbs, and the hens 4 lbs., but their feathering makes them look larger.

The breed appears “royal” in nature, belying its feral heritage. In type, size, and flowing plumage, the Sumatra is similar to the Yokohama and Cubalaya breeds.

Sumatra hens lay about 100 small, white, or lightly tinted eggs per year. (Ornamental birds are not generally known for their egg or meat production.) They can also get broody, although they are generally non-setters, and can be excellent mothers. They are good winter layers. Both adults and chicks are very hardy and easy to raise.

Sumatra chickens are active and alert and are especially good at launching themselves vertically to escape dangers. Roosters are jumpy and can be flighty. The breed excels at being an ornamental breed but is not the best choice for a backyard flock as they are hard to raise, do not like to be handled, and are prone to flight.